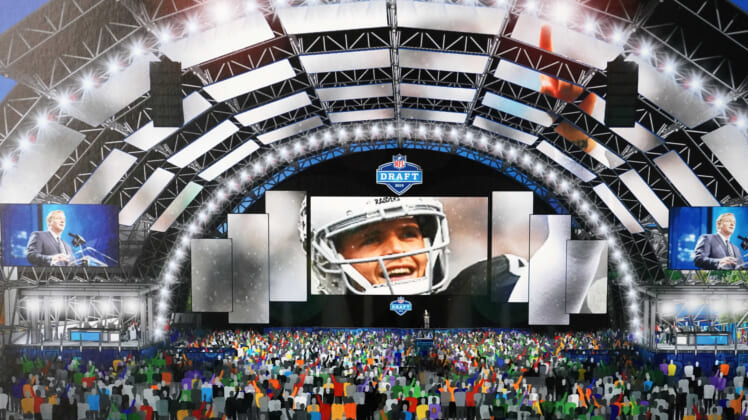 In addition to hosting the 2022 NFL Draft, Las Vegas has become an up-and-coming sports city, beginning in 2017 with the city’s first professional team, the Vegas Golden Knights, who came just short of a Stanley Cup during their inaugural season.

On top of the hotels and primetime places, Sin City has also seen a rise with multiple basketball tournaments, both at the college level and at the NBA level with the NBA Summer League taking place at the University of Nevada Las Vegas. Furthermore, UNLV will host the West Regional for the Sweet 16 and the Elite 8 in next year’s NCAA Tournament.

Related: How Las Vegas has become a mecca for college basketball

On the links, Las Vegas has also become a site to host PGA Tour tournaments, including the annual CJ Cup, which takes place in October, and the latest version of Capital One’s The Match in June at the Wynn Golf Club, featuring Tom Brady, Aaron Rodgers, Patrick Mahomes and Josh Allen.

The list of big-time sporting events continues. On top of hosting multiple MMA and UFC fights multiple times a year, the potential for a Major League Baseball franchise has become a possibility in recent months.

Ultimately, with the Raiders organization moving to Las Vegas to begin the 2020 season, it brought professional football to the Sin City at Allegiant Stadium.

Over the last couple of seasons, Raiders fans have made their way to Allegiant Stadium from places such as Oakland and Los Angeles, where the organization had been located previously. With the additions of All-Pro wide receiver Davante Adams and edge rusher Chandler Jones to complement quarterback Derek Carr and edge rusher Maxx Crosby, the fan base at Allegiant Stadium and the people coming to Las Vegas will continue to increase.

On top of hosting the 2022 Pro Bowl a couple of months ago, which Crosby took home defensive MVP honors, the Raiders continue to be at the forefront of the NFL as the Silver and Black are hosting this year’s NFL Draft, which takes place April 28-30.

With all of these events taking place, highlighted by the NFL Draft, Las Vegas Raiders general manager Dave Ziegler said the community should take advantage to experience the draft.

The three-day event, which is free to the public, is taking place on the Las Vegas Strip behind The High Roller and The LINQ, adjacent to Caesars Forum.

The Raiders were originally set to host the NFL Draft in 2020, but it was postponed 24 months due to the COVID-19 pandemic.

In addition to the NFL draft, there will be an interactive theme park for fans and families, hosted by the NFL. People can run the 40-yard dash, participate in the high jump, or even view the Raiders’ three Lombardi Trophies.

Ziegler said this is an event no one can miss, especially with memories of his own, long before becoming the Silver and Black GM.

“Embrace it and enjoy it. It’s a special thing to be able to host the draft and go down there and experience all the things the NFL has set for fans to experience and actually go see the draft,” Ziegler said. “I actually attended the draft in New York City in 2007. I waited out in line outside Radio City Music Hall at like 5:30 in the morning to get into the draft as a fan.

“It was the year Randy Moss get traded I think on the second day. That was when the draft was Saturday and Sunday. I sat in there and listened to the draft and had that experience myself as a fan before I got into this business.”

Although Las Vegas does not pick until the third round – barring any trades – being in attendance to see college football’s best players from a season ago is a treat in itself on day one.

Whether you are a football aficionado or a Las Vegas resident, the NFL draft is for everyone to experience this unique event.

“If you love football, the NFL draft is an exciting thing,” Ziegler said. It’s an exciting thing for your teams. But for the people in Vegas, I encourage them to go down there and experience it. We should take pride in hosting these events here in Vegas. They’ll have to wait a little bit as of (last week) until when we pick if that’s how it all works. But they should be ready for an exciting weekend.”