Led by Bill Belichick, the New England Patriots are typically active on the NFL trade block. Coming off a surprise playoff appearance under first-year quarterback Mac Jones, there’s every reason to believe this will be the case again in 2022.

New England has holes to fill on both sides of the ball, including the skill positions on offense. It also might have to replace impending free agent J.C. Jackson, who is slated to test the waters on the open market.

For a Pats squad that sometimes defines the unconventional, there’s every reason to expect the unexpected. That includes the three trade scenarios listed below.

Various reports indicate that New England is interested in acquiring Anderson in a trade with the Carolina Panthers. A 1,000-yard receiver back in 2020, Anderson himself is said to be on the trade block and could potentially be had on the cheap.

Any move to acquire the 28-year-old slot receiver would cost $10 million against the cap in 2022. New England is currently $7.33 million under the cap. It has a ton of avenues to create more room, including moving off 2021 free-agent signing Nelson Agholor. In reality, Anderson would be an upgrade in the slot over Agholor.

Remember, the 28-year-old Anderson has been forced to catch passes from Sam Darnold throughout the majority of his career. Just imagine how he’d perform with a much more accurate quarterback in Mac Jones. It could be all sorts of sexy.

Speaking of Agholor, New England is already looking to move off the former Philadelphia Eagles first-round pick. Signed to a two-year, $22 million deal last March, moving off Agholor would save nearly $5 million against the cap in 2022. It should be expected given how he performed a season ago.

The question here is whether Agholor would even draw interest on the trade block given his regression in 2021 and contract situation. However, the slot guy is only one year removed from tallying nearly 900 yards and eight touchdowns with the Las Vegas Raiders in 2020. Some team with a ton of cap room could offer up a late-round pick for the veteran.

New England might like what it has in young backs Damien Harris and Rhamondre Stevenson. The two combined for 1,535 rushing yards and 15 touchdowns a season ago. They really helped create balance for then-rookie quarterback Mac Jones. However, the idea of getting a more dynamic back on the cheap could make sense.

Slated to enter the final season of his rookie deal, it’s being noted that Barkley could be had for a fourth-round pick. Despite some injury issues, he’s seen as a dual-threat back and one of the most-electric players with the ball in his hands. The Penn State product has recorded 190 receptions in 44 career games. 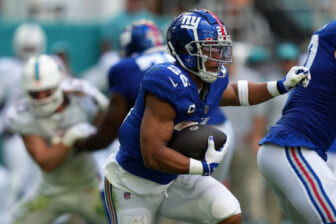 More than anything, Barkley’s presence would be similar to when Jones had Najee Harris with the Alabama Crimson Tide back in 2020. That is to say, someone who can act as a safety valve in the passing game. Making a move for Barkley wouldn’t necessarily impact Harris or Stevenson. Rather, New England would go with a three-headed monster in the backfield.