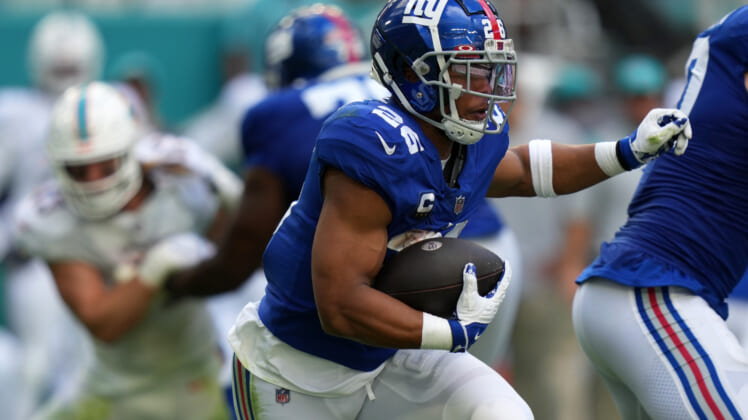 There’s a decent chance that the New York Giants will pull off a Saquon Barkley trade during the coming 2022 NFL Draft.

Following a fifth consecutive losing season, the Giants are now set to retool with a completely new power structure in place. That includes general manager Joe Schoen and head coach Brian Daboll. The two have no built-in relationship with the injury-plagued Barkley and could look to move him rather than let the Pro Bowler enter his contract year. In fact, it’s something Schoen himself just recently admitted was possible.

The Kansas City Chiefs might still be hoping that Clyde Edwards-Helaire becomes the player worth that 2020 first-round pick. He averaged an impressive 4.4 yards per carry through his first two seasons, but durability is a real issue for him. Even when he’s on the field, Kansas City doesn’t utilize him in passing situations. Obviously, that’s a problem for a pass-heavy team.

Barkley’s numbers this past season were atrocious and he also comes with durability red flags. But Edwards-Helaire is running behind a quality offensive line with the most-talented quarterback in the NFL. This would also be a way for the Chiefs to replace some of the production they lost on offense after shockingly trading Tyreek Hill to the Miami Dolphins.

If Barkley returns to form, two years removed from his torn ACL, Kansas City’s offense returns to a level we saw in the 2019 and ’20 seasons. He can become the featured back in Andy Reid’s game plan, something the coach has certainly been looking for in recent years.

Despite re-signing Leonard Fournette in free agency, there’s still a major hole at running back in Tampa Bay. The team lost Ronald Jones to the aforementioned Chiefs. Why not buy low on Barkley and see if he can excel with Tom Brady in the backfield?

Having already exhausted a 2022 draft pick on guard Shaq Mason, the Buccaneers double down by offering up another mid-round selection for Barkley. Talk about acquiring a potentially dynamic back on the cheap.

This is the perfect landing spot for Barkley. Devin Singletary, Buffalo’s 2019 third-round pick averaged a respectable 4.6 yards per carry this past season. But he isn’t a dependable pass-catching threat and the team’s reluctance to feed him consistently suggests they could be happier at running back.

Similar to Kansas City, the personnel could save Barkley’s career. Opponents are frequently playing two deep safeties against Buffalo, wanting to prevent Stefon Diggs from burning them deep. With quarterback Josh Allen also a dangerous rushing threat, Barkley could enter the backfield and make Buffalo’s unique RPO designs even more difficult to stop.

The Bills will likely be in the market for a running back this offseason and if Barkley is available, making a deal with Schoen and Daboll would work. Buffalo general manager Brandon Beane obviously has a working relationship with the two dating back to their days together in Western New York.

It sure looks like Tua Tagovailoa will remain with the Dolphins for another season. The firing of head coach Brian Flores due to a disconnect with general manager Chris Grier over Tua adds another layer to this.

We know what the Dolphins want their offense to look like. New head coach Mike McDaniel will want to find a dual-threat back that defined his days with the San Francisco 49ers. Think a more-talented version of Raheem Mostert. That’s what Barkley could bring to the table — adding another element to this offense to go with the recently-acquired Tyreek Hill.

If the 49ers are forced to trade disgruntled wide receiver Deebo Samuel, they’ll have to find someone to pick up the loss in production. While Barkley plays a different position and is injury-plagued, he’d be an absolutely stellar fit in Kyle Shanahan’s offense.

The idea would be to team Barkley up with stud youngster Elijah Mitchell in the backfield. Add in the presences of George Kittle and Brandon Aiyuk as well as talented quarterback Trey Lance, and there’d still be a lot to like about this offense.