Leonard Fournette, the running back with the sixth-best yards from scrimmage last season, has reached an agreement on a new contract with the Tampa Bay Buccaneers.

On Tuesday morning, ESPN’s NFL insider Adam Schefter was first to report that the five-year veteran had come to terms on a new pact with the Bucs for three more seasons at $21 million. Sources also told the outlet that $11 million is guaranteed, and the contract could be as much as $24 million if Fournette reaches certain benchmarks during the deal.

The 27-year-old was the best running back left on the free-agent market heading into the week. Despite having meetings with the New England Patriots on Monday, Fournette decided to come back and sign his first long-term contract with the team he has played the last two seasons with. Which includes the franchise’s Super Bowl-winning team in 2020.

Fournette played his first three seasons in Jacksonville after being selected by the Jaguars with the fourth overall pick in the 2017 draft. In two of his three seasons with the Jags, the LSU alum ran for over 1,000 yards. His best season to date came in 2019 when he rushed for 1,152 yards, earned another 522 receiving yards, and added three touchdowns.

After a down year in 2020 where he only started three games in his first season in Tampa Bay and was reportedly humbled by the experience, he rose back up to prominence in that year’s playoffs and his follow-up season with the team. Gaining 1,266 yards from scrimmage and 10 touchdowns for the Bucs in 2021. 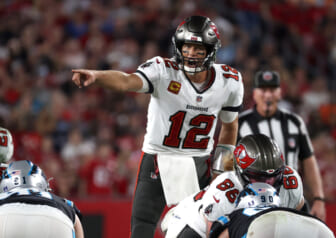