Any time an organization changes its general manager and head coach, there are bound to be some major changes. For the Minnesota Vikings, that change might not occur at quarterback.

Their starter for the past four seasons, Kirk Cousins has taken his fair share of heat for various reasons, both on and off the field. Signed to help the team reach the Super Bowl, he hasn’t been able to get past the Divisional Round. Now, Cousins has just one year remaining on his contract, a deal that’s generated its own criticism.

With new head coach Kevin O’Connell brought on board, the Vikings added a major proponent of Cousins, from their time together in Washington in 2017. This connection naturally leads to their likely next move, which is extending Cousins to help bring his cap number down for 2022 and to ensure the Vikings aren’t left without a starting quarterback at the end of the year.

According to Tom Pelissero and several others, the Vikings will attempt to lock Cousins in with a longer contract this offseason. Despite Kellen Mond being selected in the third round in 2021, with several fans hoping to get a look at him in the team’s final game of the season, they will have to wait even longer to see a different QB under center. 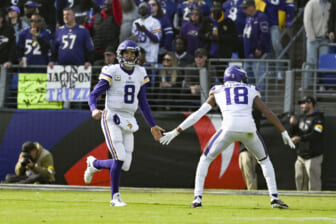 Next contract of Kirk Cousins could define Minnesota Vikings career

When Cousins initially signed on with the Vikings, he became the highest-paid player in NFL history. Since then, several other players have surpassed him, pretty much any time a top QB signs a new deal, the old record is broken.

This time around, Cousins isn’t expected to break the bank, but he will still command a large salary. Exactly how much of the team’s cap will be committed to one player remains to be seen. Right now, Cousins accounts for 21.43% of the team’s cap.

More important than his salary will be his play on the field. It’s easy to make the case that Cousins should do what some other quarterbacks in pursuit of a Super Bowl do, by sacrificing some personal gain for the greater good of the team. But that’s easier said than done.

Cousins can still play at a high level, but like all others, he needs a strong supporting cast to help take the team where they want to go.

Tom Brady didn’t go to Tampa Bay and get it done by himself. Same with Matthew Stafford paired with Cooper Kupp in LA, or Joe Burrow with Ja’Marr Chase in Cincy.

Yet, if Cousins wants to leave a true legacy behind in pro football, he has the opportunity to make a difference by not taking the absolute most money the Vikings are willing to fork over. He should want to do like the Rams or Bucs do and build a super team capable of winning the Lombardi.

The Vikings have a solid base of talent from which they can build, but they’ve been mired in mediocrity since Cousins hopped on board. That’s even after adding a superstar receiver like Justin Jefferson while having a Pro Bowl talent like Dalvin Cook in the backfield. Yet, the roster still has gaps that need to be filled, one way to do that is by Cousins slightly reducing his salary for even one or two seasons in an attempt to make a decent team into a great one.

That’s why these contract negotiations will be crucial to the Vikings’ success over the next few seasons. If the Wilfs want to win a championship, which, by all appearances they do, then Cousins cannot be among the top-five or even top-10 highest-paid quarterbacks in the league, because that’s just not his game.