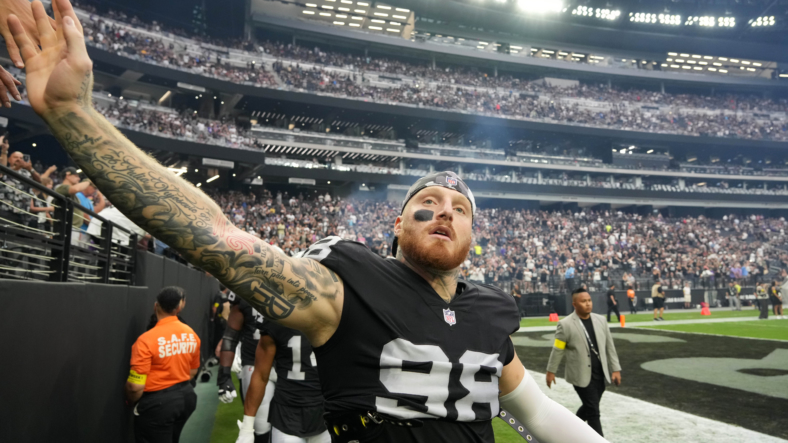 The Las Vegas Raiders showed signs of promise with their discipline (no turnovers and few penalties per game) and strong ground attack through the preseason, but now the games count in the win-loss column. The Silver and Black will face one of its division rivals in the Los Angeles Chargers, who certainly remember how the 2021 season ended at Allegiant Stadium.

Compared to Week 18 of the previous campaign, both teams look much different now.

The Chargers acquired edge-rusher Khalil Mack, drafted a first-round guard in Zion Johnson, and signed defensive tackle Sebastian Joseph-Day along with a versatile defender in Kyle Van Noy. Los Angeles also brought in cornerback J.C. Jackson via free agency, but he’s doubtful to play while on the mend from ankle surgery.

With several new faces set to play key roles, forget how the last game between these teams played out, though we could see another high-scoring matchup with splash plays on defense near the line of scrimmage.

The Raiders need to get the upper hand in three matchups to increase their chances of a win over the Chargers Sunday—and it all starts in the trenches.

Related: 5 key factors to watch in the Las Vegas Raiders’ first game of 2022

With a close eye on the right tackles in this contest, we’ll start with the Raiders’ side of the matchup.

In 2019, both Mack and Bosa (with the same respective teams) flipped sides frequently:

We must abandon the thought that the left tackle is more valuable than the right tackle. With top-tier edge-rushers like Mack and Bosa able to line up on both sides, defensive coordinators can exploit the weaker pass protector between your starting tackles.

Kolton Miller is the Raiders’ best offensive lineman, and he even struggled against the Chargers in both meetings last year, allowing five pressures, including two sacks, in those games.

Eluemunor, who played on both sides of the line through the preseason, gave up two pressures in 14 snaps while lining up exclusively on the right side in the Raiders’ final exhibition outing against the New England Patriots. He emerged as the lead right tackle late in training camp.

After five years in mostly a backup role, Eluemunor faces a tough test. Head coach Josh McDaniels should be prepared to give him help on the right side and needs a better performance from Miller against the Chargers.

In the lead-up to this contest, you’ll hear a lot of justified concerns about the right side of the Raiders offensive line, but Charger Report’s Nick Cothrel appeared on Silver and Black Today and mentioned that the Chargers have a similar weakness, specifically at right tackle.

To Pipkins’ credit, he only gave up one pressure in 48 snaps at right tackle through the preseason. However, in regular-season action, the third-rounder from the 2019 draft has struggled in pass protection on both sides of the line.

As a rookie, Chargers left tackle Rashawn Slater had a Pro Bowl year, giving up four sacks (26 pressures) through 1,116 snaps all season. Patrick Graham may overload the right side of the Chargers’ offensive line to test Pipkins, or perhaps Crosby wreaks havoc on that side by himself.

Last year, Crosby lined up on the left side of the Raiders’ defensive line (right side of the opposing team’s offensive line) for 92.4 percent of the snaps. Meanwhile, with the Arizona Cardinals, Jones logged 67.7 percent of his pass-rushing snaps on the right side.

Graham should feel confident in the matchup between Crosby, who’s coming off a Pro Bowl year (42 pressures, eight sacks and 13 tackles for loss) and Pipkins.

As previously discussed, Hobbs could take on a much bigger role this year after he played most of his snaps in the slot through his 2021 rookie campaign.

Before final roster cuts, Vegas traded cornerback Trayvon Mullen to the Arizona Cardinals in exchange for a conditional 2023 seventh-round pick that can become a sixth-rounder. By the way, he’s out this weekend with a toe injury.

Mullen’s exit creates the pathway for Hobbs to line up on the outside in base and in the slot while the Raiders play in nickel formation with five defensive backs. Keep in mind that he lined up on the boundary as a collegian at Illinois for four years.

Essentially, we could see Hobbs follow Allen in coverage with Anthony Averett mixing in on the outside in nickel alignment.

If Hobbs shifts between the inside and outside, he’ll draw a heavy dose of Allen, who’s earned Pro Bowl honors in five consecutive campaigns and led the Chargers in catches (106) last season.

We’ll find out right away if Hobbs can handle multiple responsibilities in the secondary (against top-shelf receivers) as he moves on to the next stage of his development process, though the coaching staff should exercise some patience with the second-year pro.