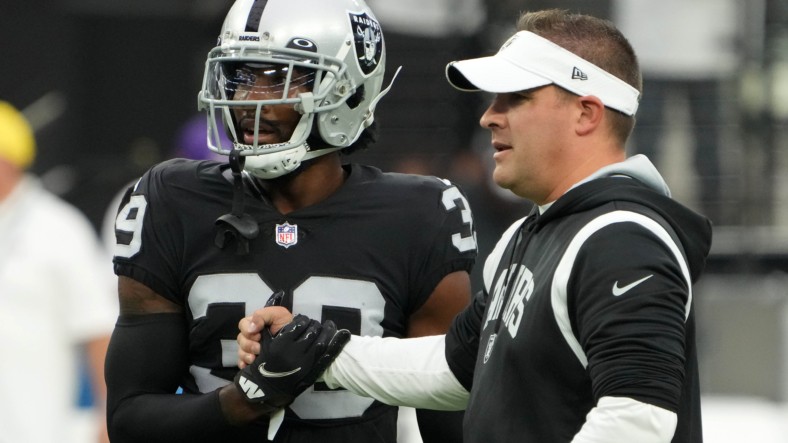 The Las Vegas Raiders raised some eyebrows with the Trayvon Mullen trade, but it could be the opening of an opportunity for cornerback Nate Hobbs to become a star in the secondary.

Las Vegas traded Mullen to the Arizona Cardinals in exchange for a 2023 conditional seventh-round pick, a minimal return considering his on-field production. Mullen led the team in pass breakups from 2019-’20 seasons and registered 28 pass breakups and four interceptions in 37 career games (31 starts).

However, you have to consider that he missed 12 games last year, underwent surgery in May and could be nothing more than a one-year rental in a contract term. His down season coupled with a recent significant injury likely hurt his trade value. Still, one can argue that a starting-caliber cornerback is worth more than a conditional seventh-round pick.

Here’s the primary concern: the Raiders cornerback room doesn’t have an established veteran who’s played at a high level for multiple seasons. Mullen was arguably the Raiders’ best boundary defender going into the 2022 season.

Raiders’ situation at corner creates an opportunity for Nate Hobbs

Rock Ya-Sin went through ups and downs with the Indianapolis Colts and had been benched multiple times over the past two years. Anthony Averett has only served as a full-time starter for one year (in 2021) with the Baltimore Ravens. Vegas released Darius Phillips, who lined up in the slot and on the boundary in the preseason.

For now, the Raiders have Ya-Sin, Averett, Hobbs, Amik Robertson and Sam Webb at cornerback.

Robertson has struggled, and Webb is an undrafted rookie. Barring the addition of a proven commodity, Vegas will rely on a trio of young cornerbacks to make leaps in the upcoming campaign, but keep a close eye on Hobbs.

Hobbs had a standout rookie term, and his coverage ranked among the best from Pro Football Focus’ perspective:

We should always be careful with subjective grades, though Hobbs only allowed 8.1 yards per reception, which is impressive for a rookie slot cornerback who’s asked to cover a variety of different receivers on the inside—from the speedy threats to bigger chain-movers.

This offseason, Hobbs spent a lot of time going against star wide receiver Davante Adams, who praised the young cornerback after former NFL wide receiver Chad Johnson posted a video on Twitter of the Raiders teammates battling one-on-one at practice:

If iron sharpens iron, Hobbs should look like a machete this season.

Hobbs didn’t see a lot of action in the preseason, though he took eight snaps on the boundary and two in the slot in the Hall of Fame Game against the Jacksonville Jaguars, per Pro Football Focus. We could see more of that in 2022.

Without Mullen on the outside, Hobbs could handle snaps on the boundary when the Raiders line up with two cornerbacks in base formation and shift inside to the slot for snaps in nickel alignment (three cornerbacks). He would play about 90 percent of the snaps with those duties—similar to Indianapolis Colts Pro Bowl cornerback Kenny Moore II.

Vincent Bonsignore of the Las Vegas Review-Journal believes the new coaching staff will keep Hobbs on the field as much as possible:

If the preseason tipped off anything and Bonsignore is correct, Hobbs has a pathway to stardom if he excels as a versatile inside-outside cornerback.

Some fans may be concerned about an expanded role for Hobbs because he played most of his snaps (702) in the slot and only lined up 25 times on the perimeter last season, per PFF. For those of you a bit worried about that, remember, he played outside cornerback at Illinois under a head coach with pro experience in Lovie Smith, who’s the lead skipper for the Houston Texans.

Hobbs isn’t new to boundary responsibilities. After a slow start on the collegiate level, he saw an uptick in production in his final two terms. Perhaps a switch back to the outside comes to him like riding a bike. His reps against Adams over the summer may have prepared him for matchups against top-tier NFL receivers.

Yes, the Raiders’ decision to trade Mullen is a gamble, but they may see something uniquely special in Hobbs, who looks like a potential Day 3 draft steal like edge-rusher Maxx Crosby and wideout Hunter Renfrow. Perhaps the Jon Gruden-Mike Mayock regime left over another star in the making, and the new coaching staff just needs to tap into Hobbs’ full skill set.

If new defensive coordinator Patrick Graham moves Hobbs outside, and he falters, the Raiders can always use Averett in a full-time position on the boundary opposite of Ya-Sin. But for now, it seems like they’re going to give Hobbs a chance to shine in two important roles.