Las Vegas Raiders offensive tackle Jermaine Eluemunor spoke candidly on Thursday about his missed opportunities in the past with the Baltimore Ravens, New England Patriots and Raiders.

The versatile offensive lineman didn’t pull any punches, telling reporters about what he didn’t do back then and what he’s doing now with a chance to become the best player possible for the 2022 season.

“A clean slate was especially good for me because I feel like the last five years of my career I kind of wasn’t serious as I should have been whether it’s nutrition, weight, mentality, I wasn’t all in. Josh (McDaniels) coming in knowing who was and who I am—I’ve benefitted a lot from that. Just being able to recreate myself this year, recreate the type of player I am and the person I am has been really good for me.”

Las Vegas Raiders tackle Jermaine Eluemunor on his past struggles, how it helped him today

Eluemunor admitted he played overweight and had a “sloppy” build in recent seasons, which factored into why teams replaced him in starting lineups. The Raiders’ website lists him at 6-foot-4, 345-pounds, but his own assessment suggests that the 27-year-old probably weighs less than that now.

Back in June, we examined why Eluemunor could make the most of a regime shift. Part of the case was his history on the right side (277 vs 141 on the left per Pro Football Focus).

Eluemunor took over the starting job at right guard in 2021 in place of Denzelle Good, who tore his ACL in the season opener against the Ravens. However, the previous coaching staff benched him and shifted Alex Leatherwood from right tackle to guard after Week 4 and Eluemunor didn’t play another snap.

The best opportunity could be his last

Las Vegas brought in a new administration and then re-signed Eluemunor on a one-year, $1.25 million contract. On Thursday, the sixth-year pro spoke of a harsh reality as it pertains to his career outlook.

While many fans and yours truly believe the Raiders need to add an offensive tackle from the free-agent pool, The Athletic’s Tashan Reed reported that the team has a different feeling about the position.

“My sense is that Parker’s injury is significant but not season-ending, which is why he hasn’t been placed on injured reserve yet…The group of potential right tackles isn’t exciting even if Munford is fine and Parker is able to get healthy at some point during the season, but the Raiders don’t view the free-agent alternatives as much better.” 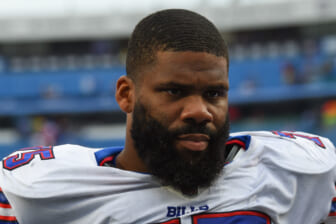 Reed also explained that the Raiders have some concerns about Daryl Williams’ performance at right tackle with the Buffalo Bills last season.

If general manager Dave Ziegler doesn’t add to the current stable of tackles on the roster, Eluemunor looks like the best option on the right side.

Why Jermaine Eluemunor is the best option

In the past, Eluemunor’s versatility has helped him keep a job and fill in with the starters, but this year, he has a clear advantage in experience over Leatherwood and Munford in a battle at right tackle. On top of that, the former Patriot has played under McDaniels for two seasons, which means he’s familiar with the scheme and the responsibilities of the player at that position. Based on health, Parker may not be available for quite some time.

Thus far, through the preseason, none of Vegas’ options at right tackle have looked terrible, but they haven’t looked absolutely impressive either.

Going back to the start of training camp, Leatherwood “trailed” Parker in the competition at right tackle, per NBC Sports’ Peter King. Before Munford left Wednesday’s practice with an injury, he handled most of the first-team reps over Leatherwood, per Reed, which isn’t a great sign for the latter.

If Munford doesn’t suit up for Saturday’s game against the Miami Dolphins, Eluemunor may open the upcoming contest with the starters at right tackle. Even if he doesn’t and Leatherwood fails to impress the coaching staff, McDaniels may go with the player he knows who’s played in his system.

Parker’s uncertain status, Munford’s inexperience along with his injury and Leatherwood’s minimal improvements at right tackle may open the door for Eluemunor to capitalize on what he believes is his final opportunity to become a starter in the league.

With a change in his diet and mentality, Eluemunor seems prepared to play wherever an opportunity arises, but he told reporters about his preference to play at tackle.

With two preseason games left and joint practices with the Patriots coming up, Eluemunor seems ready to take his career to another level. At this point in the offseason, McDaniels and the coaching staff may trust him in a starting spot more than a free agent who would have to get up to speed within three weeks of the team’s season opener against Khalil Mack, Joey Bosa and the Los Angeles Chargers. Perhaps it’s his time to shine.