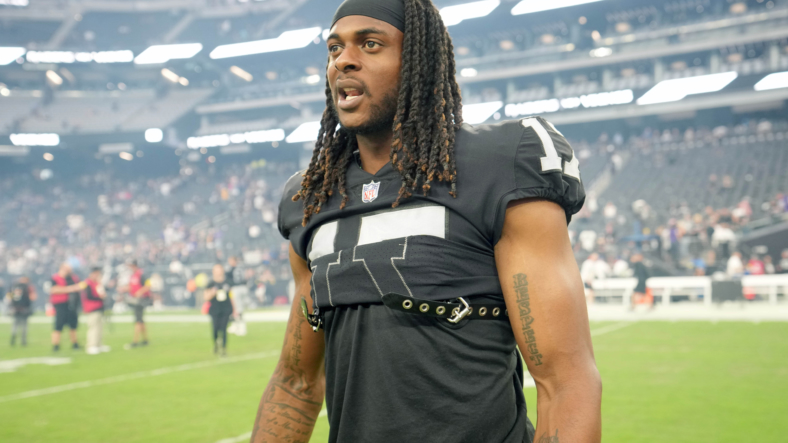 Opening Day for the Las Vegas Raiders is a mere two days away.

Las Vegas has had an eventual offseason with a new head coach while bolstering its offense and pairing a future Hall of Fame defensive end with one who had a breakout campaign.

The Raiders are coming off of a 2021 season where – despite the resignation of their head coach – they still made the playoffs and got in thanks to a win against their first opponent this season.

On Sunday, first-year Raiders head coach Josh McDaniels leads his team inside SoFi Stadium as the Raiders go up against the Los Angeles Chargers at 1:25 p.m. PT.

As the first game is less than 48 hours away, McDaniels said the vibe is completely different as final preparations begin.

Here are five key things to watch in the Las Vegas Raiders opener.

On Friday, the Raiders announced their captains for the season.

In total, there are eight players who have the letter “C” patch on the jersey.

The 2022 captains for the Silver and Black were chosen by the players and broken down by two special teamers, three offensive players, and three defenders.

Last season, Carr and Crosby were Las Vegas Raiders captains, while Adams was a captain a season ago in Green Bay. This year marks the first time since 2017 that Harmon was named a captain, while it is the first time the other four have been selected as team leaders.

Having representation from all three phases of the game shows the recognition from their teammates in being able to identify those who became leaders in training camp.

2. What to expect from the Las Vegas Raiders scheme in an actual game

One of the things to watch during the first few games will be how the new scheme is being used in all three phases.

Looking on offense, it will be the first time Carr, Adams, wide receiver Hunter Renfrow and tight end Darren Waller will be on the same field in a game.

Renfrow, Waller, and Adams have each recorded at least one 1000-yard receiving season over the last two years.

Snaps in practice between all four of these players are one thing but the anticipation to see it in a regular season matchup continues to increase as the time gets closer to kickoff.

One of those players who cannot wait is the reigning two-time All-Pro wide receiver.

Out of the gate, the Raiders’ pass catchers will be challenged. Primarily Adams and Renfrow will be going up against Chargers safety Derwin James for sure.

One of the only injury questions on either side is Chargers cornerback J.C. Jackson, who did not practice on Wednesday and Thursday due to an ankle injury that required him to have a boot and be sidelined for 2-4 weeks since the preseason.

According to Chargers head coach Brandon Staley, he said Jackson has had the boot taken off and is listed as doubtful on the team’s injury report.

No matter who Adams goes up against, he said his mentality is centered around what he can do out wide compared to those trying to block him.

4. Raiders’ right side of the offensive line to be challenged

One of the big questions during training camp was how the offensive line, primarily on the right side, was going to unfold.

With this week’s depth chart unveiling that Lester Cotton Sr. will play right guard and Jermaine Eluemunor will start at right tackle, it explained a lot to the multitude of questions during the preseason.

Even despite the changes, Carr said he has to trust the O-line as offensive line coach Carmen Bricillo prepares the linemen.

That tall task for the entire offensive line will be going up against Chargers edge rushers Nick Bosa and newcomer Khalil Mack, who was a former Raider and returns to the AFC West.

With the amount of skill position weapons both teams have, this game could be decided at the line of scrimmage.

5. Continue to stay disciplined – no turnovers and penalties

During exhibition play, the Las Vegas Raiders, who recorded an undefeated preseason record for the first time in franchise history, Las Vegas stressed not giving up the football as a priority to learn the new scheme while trying not to lose games.

One of the goals of McDaniels’ scheme is to limit mistakes. That includes getting open-field tackles defensively, not fumbling the ball offensively, and not taking a kickoff right next to the sideline.

The players and coaches have been getting on the same page since the spring, both in meetings and on the practice field, learning how to execute plays to their best ability.

As the Raiders’ four preseason games went on, the team accumulated fewer penalties, highlighted by committing just one penalty against New England on Aug. 26.

As McDaniels has stressed all along, penalties are the plays that can negatively affect drives both on offense and defense, and the Raiders have come a long way toward correcting their mistakes.

The mentality during the preseason limiting turnovers and penalties needs to translate early on this season as the players continue to work out any kinks with this new scheme.

The Las Vegas Raiders and the Los Angeles Chargers kick off Sunday afternoon, which will be televised on CBS.