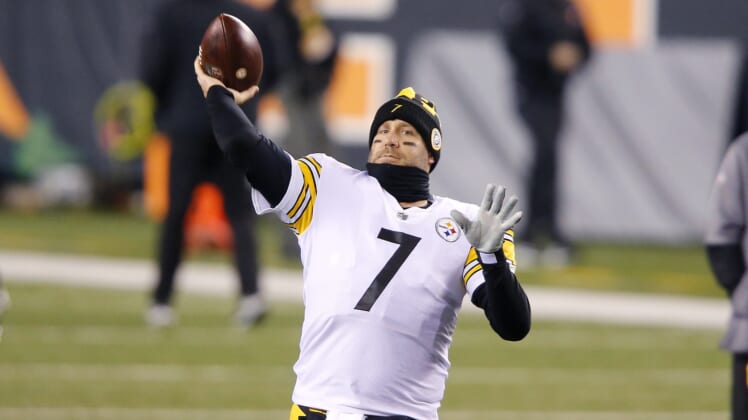 It is becoming increasingly possible that Ben Roethlisberger has played his final game as a member of the Pittsburgh Steelers. The 38-year-old signal caller is set to count $41.25 million against the cap in 2021. It’s obviously not a number the Steelers are willing to pay out.

Steelers general manager Kevin Colbert reinforced the belief that Roethlisberger could very well be jettisoned from Pittsburgh in the near future in comments he made to the media recently. Meanwhile, another report suggests that backup Mason Rudolph could replace Roethlisberger under center in 2021.

It might seem crazy to believe that Ben Roethlisberger will ever play in another uniform. That’s until we realize both Philip Rivers and Tom Brady moved on from their longtime teams last offseason. Matthew Stafford joined them recently. If Big Ben does leave the Steelers, here’s a look at his most ideal landing spots.

Ben Roethlisberger to the Indianapolis Colts

This makes the most sense. Philip Rivers’ decision to retire after just one season with the Colts has left the team in a less-than-ideal situation. Indianapolis missed out on Matthew Stafford and is apparently kicking the tires on struggling Philadelphia Eagles quarterback Carson Wentz.

Obviously, Big Ben would be a better option than Wentz even at his advanced age. The future Hall of Famer put up 3,803 yards with 33 touchdowns against 10 interceptions a season ago. He’d have a stellar offensive line in front of him and could compete for a Super Bowl as the quarterback’s career comes to an end.

Ben Roethlisberger to the Dallas Cowboys

It’s been reported that contract talks between Dak Prescott and the Cowboys remain at a standstill. They are apparently far off when it comes to negotiations. This could potentially lead to Dallas placing the franchise tag on the quarterback, only to trade him when the new league year starts. If so, the Cowboys will be looking for a new quarterback.

This scenario would include Jerry Jones and Co. using the assets they acquire in the hypothetical Prescott trade to get a quarterback of the future in the 2021 NFL Draft. Big Ben would then act as a stopgap for America’s Team. It makes sense for Roethlisberger in that he’d have a tremendous skill-position group to work with in Dallas. Besides, a healthy Cowboys team with Big Ben leading the charge has to be seen as a serious conference title contender.

It’s been reported recently that the 49ers are only going to move off Jimmy Garoppolo if they find a clear upgrade over the injury-plagued quarterback. Right now, that list includes only Deshaun Watson. But what if Big Ben becomes available? Imagine him working in Kyle Shanahan’s offense with elite skill-position players in George Kittle, Deebo Samuel and Brandon Aiyuk.

This scenario includes San Francisco trading Garoppolo to a team like the New England Patriots. From there, the team would use its first-round pick on an heir-apparent to Roethlisberger. It’s a plan, something the 49ers have not had at quarterback recently. In addition to this, Big Ben would likely welcome a move to a team that’s one year removed from a Super Bowl appearance.

Ben Roethlisberger to the Philadelphia Eagles

What about the quarterback remaining in Pennsylvania? Stranger things have indeed happened. We already know that the Eagles are looking to trade Carson Wentz. They potentially have an in-house candidate in Jalen Hurts to replace him. However, recent suggestions are that Philadelphia might use a first-round pick on a quarterback.

That doesn’t really make any sense after exhausting a second-rounder on Hurts last April. Instead, Philadelphia finds a stopgap option in Roethlisberger for a year or two while Hurts learns behind one of the better quarterbacks in modern NFL history. It would be an ideal scenario for Philadelphia.