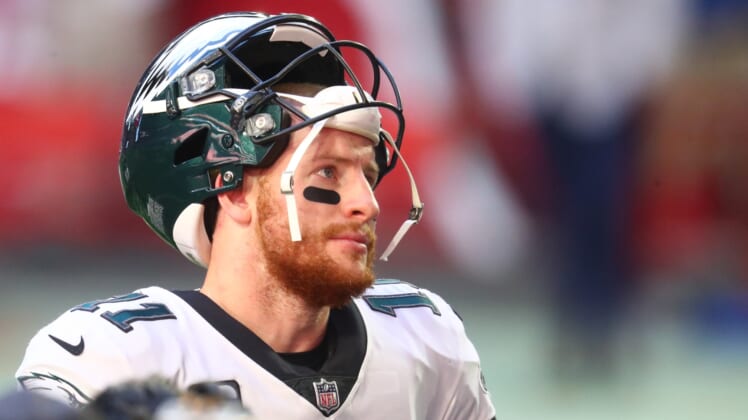 Carson Wentz wants out this offseason and the Philadelphia Eagles are prepared to trade him this spring. Unfortunately for both sides, it seems NFL teams are growing impatient with the Eagles and no general manager will meet Howie Roseman’s asking price.

Immediately after he was benched, it became clear that Wentz wanted out of Philadelphia. Unhappy with how he believes the organization has treated him, the 28-year-old quarterback is ready for a fresh start. While the Eagles are prepared to roll with Jalen Hurts as their starting quarterback in 2021, the team’s asking price seems to be standing in the way of a blockbuster trade.

Ever since he traded up to the No. 2 overall pick and drafted Wentz in the 2016 NFL Draft, Roseman has seemingly been the quarterback’s biggest fans. Both he and owner Jeffrey Lurie have remained high on their franchise quarterback, still viewing him as the long-term starter despite a disastrous 2020 season.

The Eagles wanted to keep Wentz in 2021, but he wants out and the damaged relationship can’t be repaired. So, the organization started making calls around the league to let quarterback-needy teams know this 2017 Pro Bowl selection was available. Following the Matthew Stafford trade, which netted the Detroit Lions two future first-round picks, a third-round selection in the 2021 NFL Draft and Jared Goff, the Eagles set their asking price just as high.

It hasn’t gone well for Philadelphia. The New England Patriots are reportedly out on Wentz and there are very few NFL teams that can afford to take on his salary. In short, the Chicago Bears and Indianapolis Colts are the only two teams who are seriously believed to be suitors. With few legitimately interested parties, the offers have come far under the asking price.

Multiple league sources told The Philadelphia Inquirer’s Les Bowen that they doubt any team has offered even a single first-round pick for Wentz. Instead, many believe the best-case scenario for Philadelphia might be landing multiple Day 2 picks.

It tracks with recent reports that the Eagles are losing leverage in negotiations. While it’s fine to make an attempt at fleecing another team into trading multiple first-round picks, no one is higher on Wentz than the Eagles.

Carson Wentz was one of the worst NFL quarterbacks in 2020. He threw the most interceptions (15), took the most sacks (50) and only played in 12 games. He also completed just 57% of his pass attempts and had an alarming 21.7% bad throw rate, per Pro Football Reference. Even if there is some positive regression in 2021, with Wentz improving behind a better supporting cast, he’s not a top-12 quarterback in the league.

The Eagles are still going to trade Wentz, they have little choice after how far things have already gone. For a blockbuster deal to happen, though, the front office will need to accept reality and realize they won’t get their dream offer.