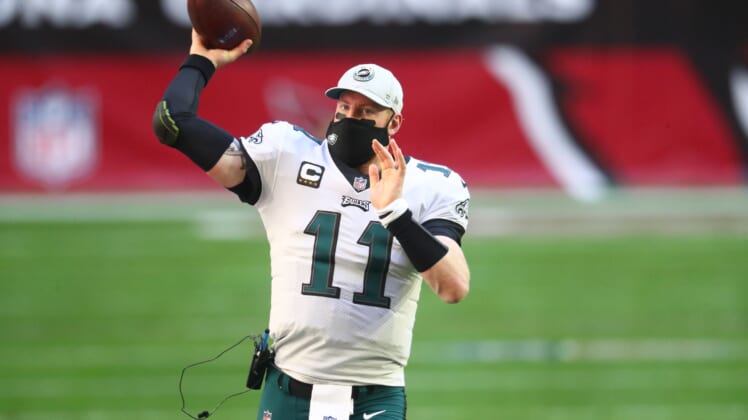 Carson Wentz wants out of Philadelphia and with NFL rumors swirling about his next destination, it seems the Chicago Bears could be leading the pack to land the former Pro Bowl quarterback and 2017 NFL MVP candidate.

Wentz first desired a trade after the Philadelphia Eagles benched him in favor of rookie Jalen Hurts. The move not only permanently damage his relationship with head coach Doug Pederson, who was surprisingly fired, but it sparked further distrust between him and the organization. After bringing in an offensive-minded coach to salvage the franchise quarterback, only for him to be uninterested in repairing the relationship, Philadelphia started taking calls on their 28-year-old passer.

While the team’s asking price has stood in the way of another blockbuster quarterback trade, there at least seems to be a leader in the pack to land Carson Wentz.

Accord to Pro Football Network’s Tony Pauline, the Bears are the active front runners to land Wentz. But, per Pauline’s NFL sources, the Indianapolis Colts and San Francisco 49ers are also teams to monitor in negotiations.

Chicago always seemed like a realistic landing spot for a trade. The club recently promoted John DeFilippo, who served as Wentz’s quarterbacks coach in 2016 and ’17, to passing game coordinator. While Colts head coach Frank Reich also has a close relationship with Wentz from their time in Philadelphia, the Bears are in a more desperate situation.

Entering the offseason, general manager Ryan Pace and head coach Matt Nagy are operating with their jobs on the line. If the team disappoints next season, both men will almost certainly be fired. Mitch Trubisky turned out to be an NFL Draft bust and Nick Foles was one of the worst quarterbacks in the league last season. Needless to say, the team needs to find an upgrade this spring.

Granted, there are no guarantees Wentz is still a reliable quarterback. Hew threw a league-high 15 interceptions and took 50 sacks this past season, playing in only 12 games. He struggled under pressure, took unnecessary sacks, made bad reads and seemed to turn off some of his coaches and teammates with his play and attitude.

It was previously reported that a trade was close, but Philadelphia’s asking price has reportedly stood in the way of a deal. Following the Matthew Stafford trade, the Eagles have reportedly sought two first-round picks in return for Wentz. It’s a price no team is willing to meet, especially given his contract and the red flags surrounding his play and attitude.

The Eagles might also be running out of time to execute a Carson Wentz trade. They are losing leverage quickly, with Chicago’s desperate front office even growing impatient. If Philadelphia misses its window, it gets stuck with a disgruntled quarterback on a huge contract and he might not even start in 2021.