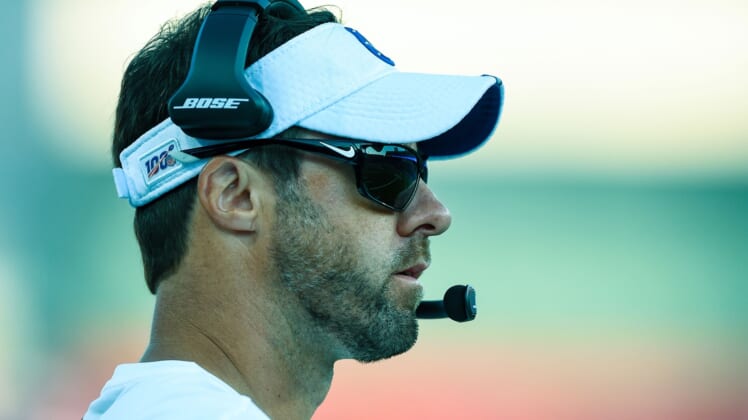 New Philadelphia Eagles coach Nick Sirianni hinted Monday that the quarterback job will be an open competition between Carson Wentz and Jalen Hurts.

During an interview on SportsRadio 94WIP in Philadelphia, Sirianni said “yeah” when asked directly if Hurts and Wentz would compete for the job.

“Everybody in this situation competition — players, coaches, every position,” Sirianni said on the show.

Sirianni is already taking hits for his introductory press conference Friday. On that day, he said he “can’t answer” if Wentz would be back with the team and said the thought “hasn’t even crossed my mind” regarding naming a starter at QB.

A Philadelphia Inquirer column that ran Sunday started with this line: “The Eagles fired Gomer Pyle so they could hire Barney Fife.” Later, it called Sirianni “Pinocchio” for saying he hadn’t thought about the QB situation yet. “It sounds even dumber than it sounds false,” wrote Inquirer columnist Marcus Hayes.

Wentz, who was benched in favor of Hurts for the final four games of the 2020 season, completed just 57.4 percent of his pass attempts (251 of 437) for 2,620 yards and 16 touchdowns. He threw a league-leading 15 interceptions (tied with Denver’s Drew Lock) in 12 starts while averaging a career-low 218.3 passing yards per game. He also ran for five touchdowns.

“We’ve watched a little bit of tape to this point now,” Sirianni said Monday. “So we’re into that process of evaluating those players and I think we have really good talent evaluators.”