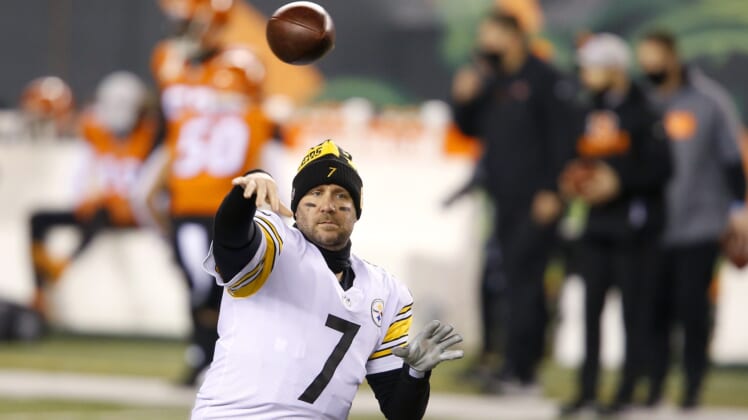 The Pittsburgh Steelers have a tight salary cap situation entering the 2021 season, and if Ben Roethlisberger doesn’t rework the final year of his contract, the team may be forced to part ways with the longtime signal-caller.

Roethlisberger is thought to be entering the last year of his NFL career, but is due to carry a $41.25 million cap hit.

Ben Roethlisberger may not play for Pittsburgh Steelers in 2021

Steelers general manager Kevin Colbert had the chance to endorse Roethlisberger as the starting quarterback for next season in speaking to reporters on Wednesday. He didn’t do it, per WPXI’s Jenna Harner:

If the vague language used by Colbert sounds slightly familiar, it’s because that’s how the Los Angeles Rams talked about Jared Goff before trading him to Detroit in exchange for Lions quarterback Matthew Stafford.

That Goff-Stafford blockbuster trade was the first big QB domino to fall of the 2021 NFL offseason. If Roethlisberger doesn’t return to Pittsburgh, that’d create an unforeseen, wildly unpredictable scenario that could change the whole quarterback landscape of the league.

The 2020 campaign was actually going great for Big Ben in the midst of an 11-0 start. He was throwing to a gifted young cast of receivers led by JuJu Smith-Schuster and dynamic rookie Chase Claypool. Unfortunately, Roethlisberger unraveled down the stretch, as the Steelers lost four of their last five in the regular season and got knocked out in the playoff Wild Card Round by the AFC North rival Cleveland Browns 48-37.

Roethlisberger did throw for 501 yards in that postseason defeat, yet much of that yardage came when the outcome had already been decided. His sudden decline and tendency to force ill-advised throws were red flags that suggested the end could be nigh for Roethlisberger’s time under center in the Steel City.

But with one year still remaining on his contract and many years of service since Pittsburgh drafted him 11th overall in 2004, Roethlisberger is putting the organization in a bit of a bind.

Yes, he deserves the big payday in light of the Hall of Fame resume he’s compiled, not to mention two Super Bowl victories. However, if Roethlisberger wants to go out on a high note, he’ll need to make things work as Colbert and the Steelers grind to get under the cap.

Even if the numbers are worked out, Roethlisberger may not have enough left in his body to last another season and play at a high level. His backup, Mason Rudolph, has flashed promise in the past, yet hardly looks like a long-term successor.

Pittsburgh also has 2019 first-round pick Dwayne Haskins in the fold. Haskins was released by the Washington Football Team for bad decision-making on and off the field, so he’s not exactly a strong contingency option as things stand now.

For as rock-steady as the Steelers have been for many decades, they face tons of uncertainty not only around the all-important quarterback position, but also when it comes to constructing the roster for 2021 and beyond. This may be Colbert’s most trying time as GM, and how he navigates the Roethlisberger dilemma will go a long way in determining if Pittsburgh fields a competitive-enough team in 2021 to return to the playoffs.

Roethlisberger probably gives the Steelers their best chance to win among the incumbent QB options, but don’t be surprised if Pittsburgh looks elsewhere in the event Big Ben won’t rework his contract or take a pay cut.