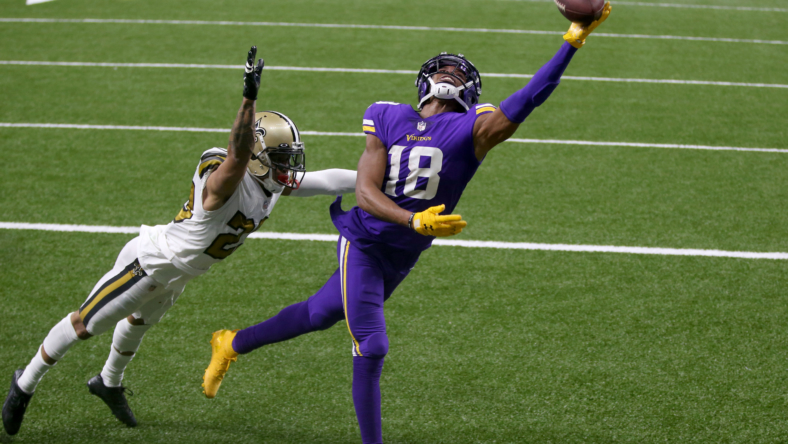 In the history of their franchises, both the Minnesota Vikings and New Orleans Saints have played in London before, as they’re set to do on Sunday at 9:30 AM ET, or 2:30 PM for those at the Tottenham Hotspur Stadium. The Vikings are 2-0 playing in London, once in 2013 and once in 2017, though both games were played at Wembley Stadium instead. The Saints are also 2-0, from victories in 2008 and 2017, also at Wembley.

With O’Connell’s 2-1 Vikings taking on Allen’s 1-2 Saints, both coaches have something to prove, but the real battle is won in the trenches. Here are five key players to watch as the NFL International Series gets kicked off in Week 4 when the Vikings take on the Saints on Sunday.

Andy Dalton tries to turn back the clock in London

While they’re undoubtedly excited to play in front of 62,000+ fans at Tottenham Hotspur Stadium, this isn’t how the Saints imagined the season would go. With usual starting quarterback Jameis Winston suddenly sidelined due to multiple fractures in his back, New Orleans has to turn to the next man up. That QB happens to be 12-year-pro Andy Dalton, who made three Pro Bowl teams during his days in Cincinnati.

Unfortunately, those days are long gone. The Red Rifle is no longer paired with A.J. Green, and the top target from the Big Easy, two-time All-Pro Michael Thomas, is also out for the game with an injury. With Thomas out, he’ll have to rely on a rookie target (more on him below) and Jarvis Landry, who’s off to a good start, with 161 receiving yards through three games. Swiss Army knife Alvin Kamara will also be a big X-factor out of the backfield, both as a runner and a receiver.

Dalton has tied once and lost once in London as a starter. On his fourth team in as many years, he too will be looking for his first win overseas on Sunday.

Alright, so Kirk Cousins has a career 10-18 record in primetime. Is this upcoming matchup in London considered ‘primetime’? For locals, it certainly is, but for Cousins, it will feel like an early morning game. He’s actually been here before, playing in London. In fact, Cousins holds the NFL record for most passing yards in London, with 458 back in 2016.

But this is 2022, and he has a completely different cast than he did back in his days with Washington. So far, Cousins has had his typical up-and-down season, flashing an ability to spread the ball around to his best targets while also making inexplicable mistakes that send his team home with another loss.

Cousins will have to be at his best against a great Saints defense that ranks fifth in the NFL in passing yards allowed and No. 1 in passing touchdowns allowed. Reaching paydirt won’t be easy.

Cameron Jordan brings his Hall of Fame résumé to the UK

All-Pro defensive end Cameron Jordan has worn black and gold for his entire 12-year NFL career thus far, and once he retires, he’s already set to earn a gold jacket and end up in the Hall of Fame too. A seven-time Pro Bowl defender, Jordan’s tallied 108 sacks in his NFL career, good for 38th all-time in league history.

Interestingly, his dad, Steve, also played tight end for the Vikings during his NFL career. Cameron’s always had a special place in his heart when playing Minnesota, and he’s managed to sack Cousins twice, also forcing a fumble. In all, Jordan has brought down Vikings QBs four times across seven matchups in his career. Facing Minnesota’s right tackle Brian O’Neill, who has the best pass-block win rate among tackles according to ESPN, we could see two of the game’s best going head to head.

Any time a team makes a first-round pick, it’s a complete gamble. They never know what to expect. Teams could end up with anything like a world-class difference maker like Justin Jefferson, or on the opposite end, with a guy you’ve completely forgotten about, like Troy Williamson.

That doesn’t appear to be the case in New Orleans, with their 11th pick from the 2022 NFL Draft. Wide receiver Chris Olave not only leads his team in receiving yards, but he also leads all other NFL rookies, with 268 through three games. He’s been incredible so far and should only receive an even bigger role with Michael Thomas out on Sunday. We’ll see if his speed is too much for the Minnesota secondary to handle. 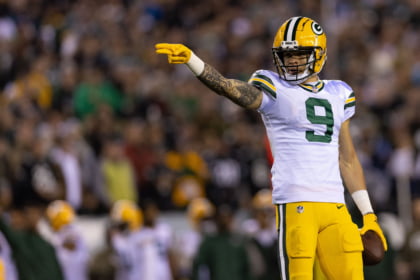 Justin Jefferson takes the griddy to a new market

While both teams have several Pro Bowl players on both sides of the ball, the biggest star of them all is Vikings wide receiver Justin Jefferson. Even non-football fans have surely seen the griddy become wildly popular, and it’s been his trademark ever since he was starring with the LSU Tigers in college. Only the star receiver hasn’t slowed down since entering the NFL.

After quarterback, there isn’t any other position that’s in the spotlight more than a wide receiver is, and Jefferson has more yards than any other player in their first two seasons of the NFL. Now in his third year, the Pro Bowl talent is looking to get back on track after a career-low 14-yard performance in Week 3.

To do so, he’ll be tasked with besting Marshon Lattimore, a four-time Pro Bowl cornerback who’s yet to intercept Kirk Cousins. Jefferson will be in for another tough test, as Lattimore’s allowed just three catches for 23 yards on seven targets in 2022, according to Pro Football Focus. We’ll see who gets the better end of the deal on Sunday.