NFL Week 4 brings a ton of questions as the schedule shifts to October. Are the New England Patriots pretty much done following the Mac Jones injury news? Can the Jacksonville Jaguars make a major statement against a league-best and undefeated Philadelphia Eagles squad?

In the midst of a breakout start to his third NFL season, Tua’s emergence could be put on hold for the time being. The former Alabama star suffered injuries to his back and ankle in last Sunday’s win over the Buffalo Bills. Set to take on the defending AFC Champion Cincinnati Bengals on a short week Thursday night, there’s no guarantee that Tagovailoa will be able to go. And it has nothing to do with the head injury he suffered against Buffalo.

“These Thursday night games, you get used to just doing the best you can. And we’re trying to get information as fast as possible. We’ll be working fluidly from that. But right now, especially in a hard-fought game like that, not just Tua, but there’s a lot of players that we’ll be adjusting to on the fly, seeing if they can turn it around and give a healthy outing on Thursday.”

If Tua is unable to go on Thursday, veteran Teddy Bridgewater would get the start. Miami is one of only two undefeated teams remaining in the NFL. Having its MVP candidate on the field would be a major boon. But McDaniel and Co. also have to think long term here.

Who will go 3-1 between the Chicago Bears and New York Giants?

Two frauds. Two teams who have seemingly started the season with fluky 2-1 records. Two teams who are set to meet during NFL Week 4 with an opportunity to go 3-1 and push closer to playoff contention. Chicago defeated the Houston Texans this past Sunday despite another disastrous performance from Justin Fields. In fact, he’s failed to complete double-digit passes in each of the three games to start this season.

“Straight up, I played likeー I want to say the ‘a’ word, but I won’t, so I’ll say I just played like trash. Played terrible, and really just gotta be better.”

As for Daniel Jones and the Giants, they are coming off their first loss of the season. It came Monday night with the struggling quarterback finding himself pressured on more than half of his drop backs while failing to throw a touchdown against the Dallas Cowboys.

Both teams might be seen as frauds heading into this one. Despite this, one should head into Week 5 with a 3-1 record. Then again, the recent trajectory of these downtrodden organizations could lead to a tie. Wouldn’t that be par for the course?

What is going on with the Las Vegas Raiders?

The story that new head coach Josh McDaniels had a closed-door meeting with owner Mark Davis after Vegas’ ugly Week 3 loss to the Tennessee Titans was an ugly development. These Raiders head into Week 4 against Russell Wilson and the Denver Broncos as the only winless team in the NFL. Derek Carr has struggled to find a connection with Davante Adams, leading to the latter finding himself frustrated.

Defensively, the Raiders gave up 262 total yards to a struggling Titans offense in the first half of Week 3 alone. While this unit performed well in the second half, the offense couldn’t do enough to come away with a win. Now at 0-3 on the season, Las Vegas hosts a Broncos team that’s coming off a dramatic win over the San Francisco 49ers. A loss here could send McDaniels and Co. into a tailspin, already leading to potential questions about his future in Sin City.

Will the real Minnesota Vikings please stand up in the UK?

Minnesota opened the season with a surprising win over the Green Bay Packers. Over the next five-plus quarters, it was outscored by a combined margin of 38-7, including falling down to the Detroit Lions 14-0 early in the second quarter last week. Kevin O’Connell’s squad then outscored Detroit 28-10 throughout the remainder of the game to win in dramatic fashion.

What’s the moral of the story here? There’s a certain lack of consistency on the Vikings’ part. When they’re playing well, this team can compete with the best in the game. When they are playing poorly, it’s hard football to watch.

“There will be some moments that we’ll go back and look on and think we could’ve had some earlier success in critical moments. So, we’ve got to get better from this.”

There’s no rest for the weary heading into London for Sunday’s matchup. The Vikes are traveling across the pond to take on a Saints team that has struggled through three weeks, but boasts one of the best defenses in the NFL. Can Minnesota put up a full four quarters? It’s a major question heading into NFL Week 4.

Both of these AFC South rivals are coming off season-saving wins in Week 3. Only six teams that have started a season 0-3 have gone on to make the playoffs since 1979. That’s what Indianapolis was facing before it upset the Kansas City Chiefs. Meanwhile, Tennessee earned its first win due to a solid first half against the aforementioned Las Vegas Raiders.

It wasn’t pretty for either team. We’re still seeing major pass-protection issues in front of Matt Ryan for the Colts. He’s been sacked on 9.3% of his drop backs through thee weeks. Meanwhile, Tennessee’s offense went dead quiet after it racked up north of 260 total yards in the first half against Vegas. With the way the Jacksonville Jaguars are playing right now, the loser of this game in Indianapolis will be facing an uphill climb moving forward. That goes without saying.

Kyle Shanahan’s squad followed up a blowout win over Seattle in Week 2 by laying a complete egg this past Sunday night. Primarily, it was Jimmy Garoppolo and the 49ers’ offense that was inept in a 11-10 loss to the Denver Broncos. This unit put up less than 100 total yards with three turnovers in the second half alone. Garoppolo himself played the role of a dud in taking a safety, too. His performance has come into question since Trey Lance went down to a season-ending injury against the Seahawks.

“I thought we played real well in the first half… In the second half, I don’t think anyone on offense did a good job, including myself. We really didn’t get into a rhythm the whole time and our defense did a hell of a job keeping us in there, but we weren’t able to get it going.”

Now at 1-2 on the season and without star left tackle Trent Williams (ankle) for the foreseeable future, San Francisco is up against it as the team hosts the defending Super Bowl champion Los Angeles Rams on Monday night.

The good news? San Francisco owns one of the top defenses in the NFL (yielding 12.3 points per game). It has also enjoyed a ton of regular-season success against the Rams, boasting a 6-0 record with Garoppolo starting. There’s some confidence in a turnaround. If not, the 49ers could be headed for a lost season. It’s that simple.

Jaguars as a real deal? Jalen Hurts as an NFL MVP candidate?

If you had told us this past summer that the Jacksonville Jaguars and Philadelphia Eagles going up against one another to open October would be among the most-interesting games on the slate, we’d have asked you to take a drug test. But here we are. Two young quarterbacks going up against one another with a chance to prove a point after starting the season in eye-opening fashion.

Lawrence has his Jaguars in the midst of a two-game winning streak and coming off a shocking blowout win over the Los Angeles Chargers in Southern California. Their young defense is playing great ball, too.

As for the Eagles, they head into this game against former coach Doug Pederson as one of only two undefeated teams remaining in the NFL. Hurts has proven himself to be a legitimate NFL MVP candidate. Philadelphia is averaging nearly 29 points per game. Its defense has recorded 12 sacks and a mere 66.5 QB rating. Yeah, this should be a fun one.

Without the likes of star receivers Mike Evans, Chris Godwin and Julio Jones in Week 3, Tom Brady actually put up his best performance of the season. However, it was not enough for Tampa Bay to take down Aaron Rodgers and the Green Bay Packers. Some late-game miscues on the part of the seven-time Super Bowl champion led to a narrow loss.

This was just the continuation of major struggles in the part of Brady and the Buccaneers’ offense to open the 2022 season. In particular, Brady has not performed at the level to open the campaign as we’ve seen in his recent history.

Brady will get Evans back from suspension for NFL Week 4 against Patrick Mahomes and the Kansas City Chiefs on “Sunday Night Football.” Jones and Godwin should still be sidelined. It will certainly be interesting to see if he can overcome these early-season struggles en route to leading Tampa to a 3-1 start to the season.

Will the Buffalo Bills get back on track against Lamar Jackson and Co.?

Last week’s loss seemed to be more of a mirage for the most-talented team in the NFL. Buffalo scored a mere three points in the second half against the Miami Dolphins despite still being able to put up 246 total yards of offense. One drive concluded with a missed 38-yard field goal, another drive that lasted north of eight minutes in the fourth quarter concluded on a turnover-on-downs with Buffalo situated at the Dolphins’ two-yard line. Less us forget wide receiver Isaiah McKenzie’s decision to stay in bounds and let the clock run out in the fourth quarter rather than setting up a potential game-tying field goal. 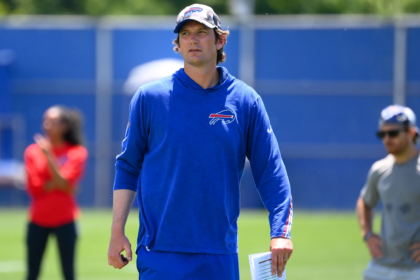 “I think there were some opportunities there that we missed. And some of that, or a lot of that is correctable,” Buffalo Bills offensive coordinator Ken Dorsey said after the game.

Coming off their first loss of the season, these Bills now must contend with NFL MVP candidate Lamar Jackson and a Baltimore Ravens offense that is riding high. Baltimore is averaging a league-best 33 points per game. It is also giving up the ninth-most points at 25.7 points per. In what should be a high-scoring affair, Josh Allen and Co. need to tighten things up on offense. There should be confidence that this will in fact be the case.

Mac Jones will miss New England’s road date with the Green Bay Packers due to a high-ankle sprain. In fact, he’s getting a second opinion on the injury after it was initially deemed that he would not need surgery. This seems to be a clear indication that the sophomore quarterback is not in agreement with the Patriots’ assessment.

All of this comes with New England sitting at 1-2 and much closer to cellar-dwelling status than competing with the Buffalo Bills and Miami Dolphins in the AFC East. It also comes with Jones having struggled big time to open his second season under Bill Belichick.

New England is facing the real possibility of a free-fall with a loss to the vastly superior Packers team on Sunday. Brian Hoyer will get the start against two-time reigning NFL MVP Aaron Rodgers. To say that things are not going swimmingly in New England would be an understatement. Can it change the narrative at Lambeau?