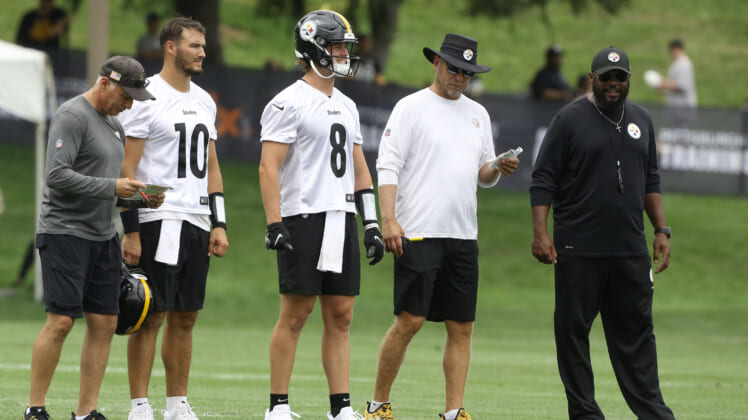 There’s no question that the Pittsburgh Steelers drafted Kenny Pickett in the first round so he could be the quarterback of the future at Acrisure Stadium. Yet, when they signed Mitchell Trubisky, he was immediately seen as the first Steelers QB who would have to follow in Ben Roethlisberger’s footsteps.

So which is it? Or could the answer to both of those questions be both QBs?

For now, Trubisky holds down the starting role, but he won’t be able to stave off Pickett forever. Eventually, the Steelers and their fanbase want to see what they have. After catching a glimpse of his ability in his preseason debut against second-and-third stringers, now head coach Mike Tomlin is suggesting he would like to see his young QB “in more varsity action“, against first-string players.

In fact, Pickett’s going to get that chance this Saturday when the Steelers take on the Jacksonville Jaguars, where it sounds like he’ll get the starting nod.

The Jaguars will be playing their third game of the preseason after getting off to an early start thanks to the Hall of Fame game, so they should be more prepared at this stage in the offseason. But how will Doug Pederson treat what will be their third of four games played? Will he leave the starters out for extended action?

It sounds like Tomlin’s banking on it, and he wants to throw his rookie to the fire when the games don’t matter. It’s the ideal scenario to test his mettle.

Can Kenny Pickett get on track to start Week 1?

By all accounts, it appears the Steelers are giving Pickett every chance to surpass Trubisky for the starting role. It sets up a tricky situation between the freshly-signed Trubisky and the Steelers. Tomlin mentioned he already knows about Mason Rudolph, but wants to see more from his young signal-caller.

Meanwhile, like Rudolph, Trubisky has established his presence as a legitimate backup QB in the NFL, but is his ceiling higher? Trubisky surely thinks so, and there may be another team or two who feels the same way.

As everyone waits to see where Jimmy Garoppolo could end up, I don’t think it’s crazy to suggest Trubisky could soon find himself on the trade block as well. If a team doesn’t want to pay Garoppolo’s salary plus likely give up more via trade, Trubisky sounds like a perfect short-term compromise.

The Steelers know Rudolph can be their backup, so why not keep him around, trade Trubisky, and hand the keys to Pickett? I think that’s exactly what we’ll see, but first the former Pitt Panther will have to go and earn it this Saturday.