Top NFL quarterback performances from Week 1 of the preseason 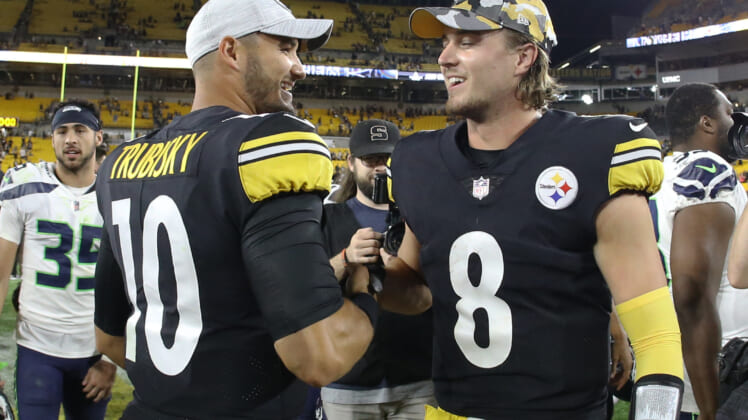 After 16 games of back-and-forth action featuring plenty of substitutions, the first week of the NFL preseason has come to a close. We saw stars in a new uniform for the first time with their new teams, but Russell Wilson didn’t leave the bench. Meanwhile, Matt Ryan and Deshaun Watson did, but they didn’t make this list.

What we have here are the top NFL quarterback performances from Week 1 of the preseason.

I hope Mitch Trubisky doesn’t plan on retiring in Pittsburgh. Trubisky did well as a starter, and Mason Rudolph also performed well, but the locals at Acrisure Stadium really only wanted to see Kenny Pickett, and it was obvious. Even before this kid could make his first NFL throw, he already had the entire stadium on his side, with his career with the Pitt Panthers a sure factor.

When Pickett made his highly anticipated debut in the third quarter, he was calm, cool, and collected, like he’s been here a thousand times. Of course, this was the first game of the first-round pick’s career in the NFL, but you would never know it.

It wasn’t a perfect day by any means. Pickett took two sacks, but an 86.6% completion rate for an NFL debut? That’s incredible. Trubisky’s going to have to be damn near perfect to keep this fan favorite off the bench.

With the game on the line in the final frame, it was Pickett who delivered the game-winning touchdown throw with some help from his receiver after the catch. Then, pandemonium.

Over 60 quarterbacks threw a pass this week, but it was Trask who led them all with 258 passing yards. With Tom Brady on hiatus, it was Blaine Gabbert who was the first QB off the bench for the Tampa Bay Buccaneers, and he too performed well.

But they already knew what they had with the 32-year-old Gabbert. Trask, the 24-year-old second-year pro, has yet to throw an NFL pass in the regular season. As can be expected, Trask had an up-and-down day, with a touchdown and a pick thrown on the day, and he started much better than he finished.

Trask came in hot, completing five of his first six passes for 53 yards, but his best throw was likely his third-quarter touchdown toss to Jerreth Sterns, where Trask showed perfect ball placement. The Bucs hope to never have to see Trask take the field this season, but if he can continue developing on the bench, they may already have their QB of the future on the roster.

Drew Lock states his case for the starting gig

Seattle Seahawks head coach Pete Carroll has a tough decision to make. No matter who he chooses, they won’t ever be Russell Wilson, which won’t make matters any easier. How did the first public test of the Seahawks’ starting QB battle go?

First up was veteran Geno Smith, and his numbers were nearly identical to Lock’s. Smith had one fewer completion, but he also didn’t have two touchdowns as Lock did. Smith added a rushing score, but nothing through the air. While Lock did take two sacks and lost a fumble, compared to Smith going down just once, the first test seems to point to Lock as the bigger winner.

Smith’s offenses led to 10 points, and Lock’s leadership led to 15, as they both played a half. Otherwise, this was a good, hard-fought battle in Week 1.

With the Los Angeles Rams still trying to determine just how to manage Matthew Stafford‘s unique elbow injury, the backup quarterback could become a vital position for the reigning Super Bowl champs in 2022. Trying to see what they have in their undrafted third-year pro in Bryce Perkins was a top priority entering the week.

Sean McVay let Perkins play the entire game, with both Stafford and John Wolford sitting this one out. Perkins proceeded to lead the Rams to a 29-22 victory over the Los Angeles Chargers, showcasing a versatile skill set along the way.

Perkins is a dual-threat option who’s shown both burst and an ability to shed defenders. Despite being pressured on multiple occasions, Perkins kept finding a way to escape, keeping the play alive. He may currently be the third-string QB in LA, but Perkins provided a lot of inspiration with his play, maybe he could become the top backup in town?

Josh Johnson is still in the NFL

It’s incredible to imagine, but Josh Johnson is playing for his 14th different NFL team in 2022. His career carousel has now brought him to the Denver Broncos, where he’s competing with Brett Rypien for the backup role behind Russell Wilson.

Johnson is 36 years old, but he doesn’t look like anyone who’s thinking about retiring from the NFL any time soon. Playing against the Dallas Cowboys, Johnson stood tall in the pocket, making throws just as he’s about to get pummeled into the dirt. Johnson displayed pinpoint accuracy at times, showing everyone why he continues to get another chance to shine.