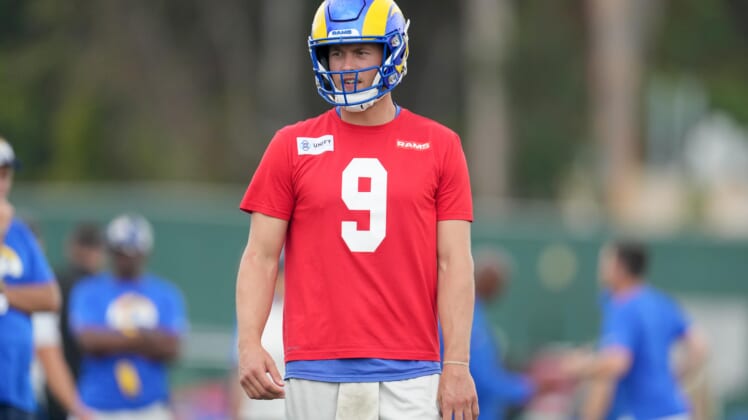 The Los Angeles Rams may have won Super Bowl LVI, but the chances of them returning to the NFL’s biggest stage at the end of the 2022 football year could be in danger.

I know we’re still six months away from declaring a new NFL champion. There’s a long way to go.

Yet, any time your starting quarterback starts experiencing internal issues like Matthew Stafford, 34, is now, it’s a major red flag.

Last week we heard about head coach Sean McVay’s plan to keep his Super Bowl-winning QB on a pitch count this training camp. At the time, it wasn’t perceived to be a big deal. The Rams had an extremely long season, including an extra game with the regular season expanded to 18 weeks, and Stafford had a big workload with his new team.

After a couple weeks at camp with a reduced throwing regimen, Stafford’s elbow hasn’t gotten any better. We’ve since learned more about the pain he’s enduring.

According to Ian Rapoport, Stafford is dealing with “bad tendinitis” in his throwing elbow. In fact, Stafford didn’t even throw at all during Wednesday’s practice, but it’s been an ongoing issue dating back months now.

In the public eye, the Rams don’t want you or anyone else to think this is a major concern. Inside the walls of their headquarters in Agoura Hills, California, you can bet the organization is sweating about their QB.

A sprain wouldn’t be much of a concern. But tendinitis tends to lead to bigger issues. If he’s been dealing with it since the spring, how can they suddenly think the injury disappears as he ramps up activity?

This sounds like a precursor to a future surgery. Maybe Stafford and the Rams are hoping to push it off until next offseason, hoping it’s a manageable injury throughout the year.

The last thing the Rams want is for Stafford’s injury to get worse.

Expectations are sky-high for the Rams to repeat this year. They’ve only seemingly strengthened their roster this offseason. They’ve retained their top talent, finding ways to keep Aaron Donald, Cooper Kupp and Stafford for multiple more years.

But injuries? That’s something no one can predict, yet if Stafford’s woes persist, it will be easy to point back to his issues in the spring and wonder why something wasn’t done to address the concern at that time instead.

Wasting a year of Jalen Ramsey, Donald in their prime isn’t ideal. It’s not Stafford’s fault his elbow is giving him problems, but the Rams could potentially be handling the situation a lot better than they currently are.

This is the danger of building a top-heavy roster that’s flush with stars. The depth suffers. And in this case, it’s at the most important position in football.

The Rams don’t have anyone behind Stafford who instills faith or trust that they’ll be able to keep the offense running on premium.

They currently have John Wolford, Bryce Perkins, and USFL’s Luis Perez on the roster behind Stafford. All are undrafted players, and already 25 or older. Basically, they’re unlikely to be discovered to have a golden arm in 2022.

My point is, the Rams need to hurry up and address their backup QB situation in a big way.

The obvious top quarterback available is Jimmy Garoppolo, but the biggest factor preventing such a move is that the Rams share the division with the San Francisco 49ers, making a trade 99% unlikely. The Rams would have to hope the football gods bless them with Jimmy G being released from his contract, which again, makes no sense for the 49ers to do, as they know a team will pony up for a trade at some point.

But that’s ok, as there are several other backup QBs who could suddenly become available for the Rams throughout the preseason. Yet if general manager Les Snead waits too long to strike, he could find more teams competing for a select number of backups capable of leading a team to a postseason spot.

Maybe the Rams give the New York Jets a call to see if Joe Flacco has any more magic in his right arm. He did help the Ravens win a Super Bowl in 2012. Both his coach and Flacco himself said this week that they feel he should still be a starter in the modern day. Maybe that comes to fruition in LA?

There’s always Gardner Minshew, who’s itching for an opportunity while he waits behind Jalen Hurts. Taylor Heinicke from Washington is another who’s proven to be capable of filling in for large stretches.

If the Rams want to take a chance on some untapped potential, maybe Jordan Love could be nabbed away from the Packers with Aaron Rodgers locked in through 2025.

Of course, the loser of the Carolina Panthers’ QB battle could become available. While another Baker Mayfield in short order may seem out of the question, perhaps a Sam Darnold one makes sense?

If there’s one thing that’s clear, all the quarterbacks mentioned would suddenly be surrounded by the most talent they’ve ever taken the field with. Even if they may not have inspired greatness in previous steps along the way, it doesn’t mean something special can’t happen in the city of angels.