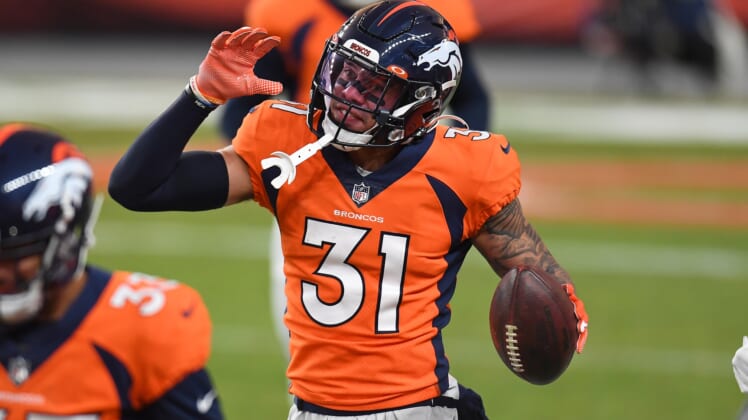 Simmons is the first domino to fall among the star players across the NFL who are prime franchise tag candidates.

Justin Simmons to play under franchise tag in 2021

Benjamin Allbright of KOA NewsRadio Colorado broke the news of Simmons receiving the tag, which means he’ll become a $13.729 million cap hit this year, per Over the Cap.

Players who are tagged a second time earn 120% of their previous salary, which now makes Simmons the second-most expensive Bronco behind superstar pass-rusher Von Miller.

Speculation has swirled that Denver may release Miller so that he can pursue an opportunity with a more obvious Super Bowl contender, so Simmons may well be the priciest player on the Broncos 2021 roster once the offseason is through.

Why Justin Simmons is worth a 2nd franchise tag

The 27-year-old free safety is a key cog in Denver head coach Vic Fangio’s scheme, so it’s hardly a surprise Simmons is staying put in the Mile High City.

There’s a real chance Simmons is going to stay with the Broncos for the long haul, but the NFL’s tighter 2021 salary cap proved to be an impediment to the two sides coming to an agreement on a multi-year extension.

Broncos general manager George Paton made sure to clarify that a contract for Simmons is in the works, though, per an official team news release:

“Designating Justin with the franchise tag is a procedural move that allows us to continue working on a long-term deal. We are completely focused on making sure Justin remains a big part of the Denver Broncos for many years to come.”

Pro Football Focus graded Simmons as the NFL’s second-best safety in 2019, and he followed that up by ranking eighth this past season.

With three straight years of not missing a single start, Simmons has proven to be a durable, reliable ball hawk on the back end. However, his skills aren’t limited to just coverage. In addition to racking up 12 interceptions and 28 passes defensed over the past three seasons, Simmons has logged an impressive 286 combined tackles in that span.

Production like that is hard to replace, and Denver recognized that by placing the tag on Simmons yet again. The team also has to square off with opposing AFC West quarterbacks Patrick Mahomes, Justin Herbert and Derek Carr for six of its games, so Simmons is an extremely valuable player to pit against those star field generals.

Speaking of quarterbacks, Drew Lock isn’t exactly a sturdy solution at the most important position on the gridiron, and is certainly worse than all his divisional counterparts. No matter how well Simmons and the defense plays, if Lock isn’t up to the task of leading this team, many other positive elements will be cancels out.

With more clarity on Simmons’ immediate future now in place, the Broncos can proceed forward with either pursuing a veteran to come in and compete with Lock, or keep exploring moving up from the ninth overall pick in the 2021 NFL Draft.

Denver has a lot of young talent on both sides of the ball, and Simmons is among the best in that group. However, unless Lock is the right quarterback or other youthful defenders step up, it stands to be a tough 2021 campaign. That could wind up forcing Simmons out of town to a better situation next offseason — and it may mean Fangio gets fired.

No one can really question Fangio’s schematic acumen, and while his system on defense has translated rather well in Denver to date, the consistent winning hasn’t followed.

Simmons probably wouldn’t agree to play under the tag again unless he was bought in to what the Broncos were doing under Fangio, and if he didn’t think the nucleus of players in place was capable of taking off as soon as 2021.