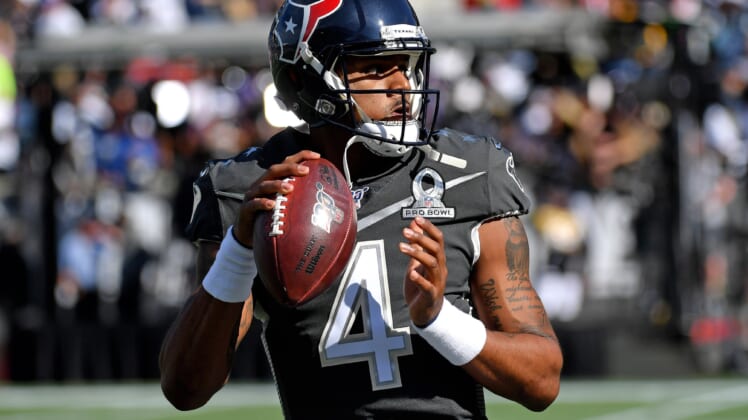 Whether a Deshaun Watson trade happens ahead of next month’s NFL Draft remains to be seen. What we do know is that the Houston Texans star wants out of dodge and has expressed interest behind the scenes in joining the Denver Broncos.

Coming off a disappointing five-win season that saw sophomore quarterback Drew Lock tie for the league lead in interceptions with 15, that position is a major question mark. It’s something new general manager George Paton has to deal with during his first NFL offseason in that role.

Speaking to the media on Thursday, Paton did not necessarily say outright that a move for Watson could be in the cards. But reading between the lines, it’s clear that the Broncos are interested.

“I can’t discuss other players who are under contract, but I’ve said before we’re going to be aggressive and we’re going to pursue every deal,” Paton said, via Kyle Newman of the Denver Post.

That’s pretty much Paton’s way of saying that the Broncos are interested in Watson without violating NFL tampering rules. He’s going to pursue every deal. That includes a potential Deshaun Watson trade.

The question now becomes what Denver might offer up to the Texans should the latter join reality and start to actually discuss a Watson trade.

It would obviously start with Lock and at least one top-end young defensive player. Perhaps, edge rusher Bradley Chubb would be of interest to the Texans after parting ways with franchise stalwart J.J. Watt earlier in the NFL offseason. Whether the Broncos are willing to trade their stud young pass rusher depends heavily on the Von Miller situation.

If not Chubb, Houston’s rebuilding defense could use a shot in the arm in the secondary. That’s where impending free agent safety Justin Simmons comes into play.

Denver could opt to place the franchise tag on him for a second year in a row, only to move the Pro Bowler to the Texans in a hypothetical Deshaun Watson trade. Obviously, multiple first-round picks would also have to head to Houston in this scenario.

We already know that Houston’s brass, led by new general manager Nick Caserio, has pushed back against even discussing a trade with other teams.

With that said, Watson’s camp has become a bit more boisterous in the past several days. It just seems to be a mater of time before he goes public with a trade demand. NFL rumors point to the Miami Dolphins and San Francisco 49ers as preferred landing spots for Watson. Both continue to be bandied about a lot.

“As for San Francisco and Miami, those teams do appear on better trajectories than the Texans. Both have coaches in Kyle Shanahan and Brian Flores who have proven they can lead a locker room,” Texans beat writer Aaron Reiss of The Athletic noted recently. “The latter already has reached a Super Bowl while proving to be one of the game’s brightest offensive minds.”

The 49ers’ brass has been clear about its intentions thus far this season. At the very least, throwing out a narrative to the media. That includes the belief that Jimmy Garoppolo will be San Francisco’s Week 1 starter. At this point, it’s probably nothing more than PR spin. If the 49ers are forced to go with Garoppolo in 2021, they don’t want to throw him under the bus.

Reiss also mentioned the Dolphins in his article.

“The 49ers can offer a scheme that’ll maximize Watson’s abilities, and the Dolphins have the flexibility to build a quality roster around Watson even after giving up a ton of assets to acquire him.”

It will ultimately take an historical package to land Deshaun Watson in a trade. For the Dolphins, that would include giving up the first-round pick (No. 3 overall) they acquired from these very same Texans in the Laremy Tunsil trade.

As for San Francisco, the team would likely have to part with multiple first-round picks and a young star. Tight end George Kittle, defensive end Nick Bosa and linebacker Fred Warner all fall into that category.

For now, teams are playing it close to the vest. Well, everyone outside of the Denver Broncos. They showed their cards big time on Thursday.