Weeks after the end of Urban Meyer’s NFL coaching career with the Jacksonville Jaguars, team owner Shahid Khan and general manager Trent Baalke are still searching for a new head coach. There are several qualified candidates the team has already interviewed, and more could be on the way. Out of the nine names they’ve been linked to so far, who stands out among the competition?

A surprising candidate that’s emerged is Bill O’Brien. The former Houston Texans head coach/general manager’s most recent handiwork can be seen with Bryce Young’s Heisman-winning campaign. Though he’s currently Alabama’s offensive coordinator, O’Brien is most known for his seven-year tenure where he compiled a 52-48 record, taking the Texans to the playoffs in four of the six full seasons he coached.

Having coached Tom Brady, Bryce Young, and Deshaun Watson, the Jaguars could fall in love with the idea of seeing if O’Brien can help Trevor Lawrence develop as well. Which, to be fair, getting the most out of Lawrence’s skillset should be the franchise’s top priority, they selected him No. 1 overall for a reason.

O’Brien’s biggest cheerleader in the front office appears to be Trent Baalke, which isn’t a bad way to potentially land a gig. But, it may not be enough to beat out the other candidates on this list. 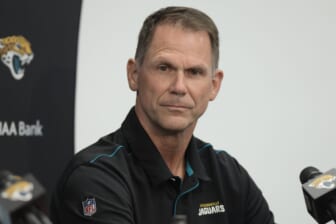 Could Pete Carroll really be on the outs after 12 years coaching the Seattle Seahawks? It’s certainly possible the organization hits the reset button this offseason. Especially if Russell Wilson wants a trade as rumors have linked to the past few seasons. Should the Seahawks trade Russ, there’s no guarantee they would want to stick with the 70-year old Carroll as they look to rebuild. And there’s no guarantee Carroll would want to be there any longer either.

At the same time, would Carroll have interest in starting all over again with a new franchise? Tough to say, but there’s no indication the peppy, competitive Carroll is ready to call it quits. The idea of being able to take over a team with a potential franchise quarterback such as Trevor Lawrence may be too hard to pass up. Carroll has seen how difficult life is without Russ at the helm, whereas the Jags have seen first-hand what hiring an unprepared NFL coach gets them.

Carroll not only has plenty of wisdom and respect, he also has a Super Bowl ring and 11 years of experience coaching an NFL team to the playoffs. The Jaguars need to do everything possible to become an annual contender and since Carroll’s been with the Seahawks, they always have been a good bet to go deep into the postseason each year.

Carroll has a 152-104-1 coaching record in his NFL career, a .593 win percentage. The win percentage for the Jaguars franchise sits at .416. Established in 1995, the Jaguars would have been better off hiring Carroll back in 1995 when Carroll was fired from the New York Jets after his first season as an NFL head coach.

If the Jacksonville Jaguars want to hire someone who’s been there before and has several years of experience working side-by-side with a Hall-of-Fame QB, they should look no further than Jim Caldwell. The former Indianapolis Colts and Detroit Lions head coach led his teams to a 62-50 record across seven seasons at the helm.

In that time, he had three seasons with 10 or more wins, including his first year achieving a 14-2 record, going all the way to the Super Bowl. But it wasn’t just Peyton Manning. Caldwell also had an 11-win season with Matthew Stafford and the Lions in 2014.

Uniquely, Caldwell really only ever had one bad year, leading a 2-14 team his final season in Indy when Manning sat out as he recovered from his neck surgery. It’s a bit strange that he hasn’t received another head coaching opportunity since.

The Jaguars could uncover one of the forgotten diamonds in the rough with a Caldwell hiring.

In 2017, Doug Pederson led the Philadelphia Eagles to their first ever Super Bowl victory. Where did it get him today? Well, they fired him after a 4-11-1 record in 2020 and now Pederson is out of the NFL in 2021. But that is unlikely to last long for one of just four individuals to ever win a ring, both as a player and as a head coach.

In five seasons coaching the Eagles, they went:

So, why is Pederson out of the league? Some were quite upset about Pederson possibly deliberately improving the Eagles’ draft position (tanking) by playing Nate Sudfeld over Jalen Hurts during the final game in 2020. However, I’d bet Shahid Khan would be willing to shave his mustache if someone told him the Jaguars could have a similar five-year stretch.

Sure, the Eagles drastically dropped off after their 2017 season, but they also suffered many injuries, including to their once MVP-candidate Carson Wentz. Pederson is 42-37-1 in his coaching career, including a 4-2 postseason record, which includes the Philly Special Super Bowl LII. The Jacksonville Jaguars could do a lot worse. 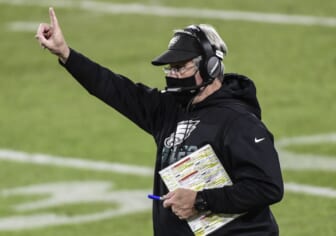 For the Jaguars, it’s now all about changing a culture that just hasn’t been indicative of success. So, why not go for a player-friendly coach over whatever it is that Meyer was in his less than a season with the team? Already seen as a top-notch head coach candidate, Leftwich could make a ton of sense.

Sure having Tom Brady helps. He’s made many mediocre coaches look great. With that said, Tampa Bay’s offense ranked second in yards and points with Leftwich calling the shots this season. From a culture standpoint, Leftwich was the Jaguars’ starting quarterback from 2003-06 — leading them to two winning seasons in the process. The Jags have accomplished that feat just twice since.

Leftwich returning to the franchise that selected him would be an awesome story, and he may ultimately be the best candidate for the job. If they nail the hire, the Jacksonville Jaguars may have their head coach locked up for the next ten-plus seasons, that alone has to be appealing.