The Indianapolis Colts have been searching for a franchise quarterback ever since Andrew Luck retired unexpectedly. Since then, the team has tried to capture lightning in a bottle with a veteran quarterback. The team’s best success was with Phillip Rivers at quarterback in the Covid season.

Otherwise, every season since Luck’s retirement has been a letdown. This past season was easily the worst of the bunch. Matt Ryan had the worst NFL season of his career as the veteran was benched not once but twice in favor of his backup. Now, the organization has the fourth overall pick in the upcoming NFL draft.

The Colts are in a prime spot to draft a franchise quarterback. Especially, since two of the teams in front of them, Arizona and Chicago, already have one. However, there is concern that other quarterback-needy teams will jump in front of the Colts via a trade. And it’s for this reason that fans are wanting the team to trade up with Chicago to secure a new quarterback.

This is where the Colts need to be smart and not move up from the fourth pick in the draft. It is tempting to move up and draft Bryce Young, Will Levis, or C.J. Stroud. However, in my opinion, this would not be a smart move.

The Colts have many needs to fill and moving up will either a) open up more weaknesses if the team pulls players from their strengths or b) limit the number of draft picks the team has.

If you watch film or even simply highlights of those players, you’ll see why there is a lot of hype about them. These players’ abilities and skill sets are tantalizing and intriguing. But my viewpoint is that none of these quarterbacks are a franchise solution. Young is the only one who appears closest to that level. However, his size is a big concern moving into the NFL.

Related: 5 QBs Indianapolis Colts could target in the 2023 NFL Draft

The difference between franchise and elite

To be fair, these three options should be elite-level quarterbacks in the NFL. The difference between franchise and elite is simply a matter of what the player does for the rest of the team. Franchise-level quarterbacks are ones who are able to raise the level of play of their teammates. Guys like Aaron Rodgers, Peyton Manning, Andrew Luck, Tom Brady, and Patrick Mahomes.

Whereas the elite-level guys are the ones who perform very well and excel when they have other elite options around them. Players like Josh Allen, Matt Ryan, Russell Wilson, Lamar Jackson, and Dak Prescott. These guys are all very good and but as the Colts saw this season with Ryan as their starter, he needs everything around him to be really good in order for him to succeed.

Related: 5 cornerback prospects the Indianapolis Colts could target in the 2023 NFL Draft

Considering the sad state of the Colts’ quarterbacks over the past few seasons and the way general manager Chris Ballard has gone about building this team, it would not be surprising to see one of these aforementioned quarterbacks selected with their first pick in the draft. However, as previously mentioned, it would be smarter for Ballard to do what he’s done most frequently, trade back.

The team’s top needs are quarterback, offensive line, and either pass rusher or tight end. The Colts could look to trade with Carolina, who has the ninth overall pick, to secure some additional draft capital. The team could then look to secure a couple of positions of need and draft someone like Florida QB Anthony Richardson or Georgia offensive tackle Broderick Jones at nine.

And then with whatever additional picks the Colts collect, they can continue using those selections to fill other team needs. Or possibly move up to get other players they value highly. Again, there are intriguing quarterback prospects in this draft, and it’s possible at least one of them is a franchise-level quarterback.

However, the cost to move up on such a gamble is not a smart business decision. As this season showed, there are many areas of need that need to be fixed. The team is not a quarterback away from contention like they’ve been thinking for the past couple of seasons. 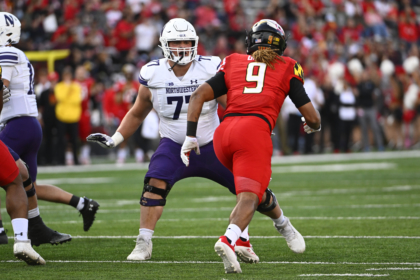