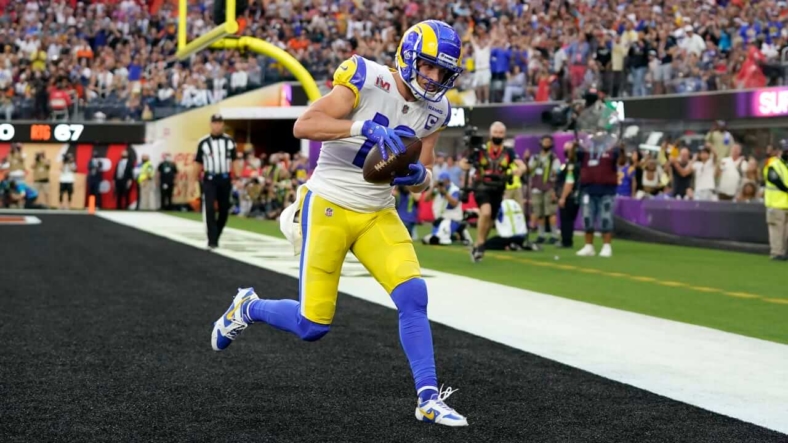 The defending Super Bowl champion Los Angeles Rams will look to repeat this season with a similar roster as last year. Former Chicago Bear standout wide receiver Allen Robinson signed a hefty three-year, $46 million contract with the Rams this offseason. The triple crown champion and Super Bowl MVP Cooker Kupp is probably the most excited person about the newest weapon, which will hopefully take some of the defensive pressure off of him this season. With one of the best defenses in the league and quarterback Matthew Stafford entering his second year, all signs point to another successful season and NFC West title.

If you’re looking to stream all the Los Angeles Rams games live, you’ve come to the right place. You can watch nearly all of the Rams’ 2022-23 season on a streaming service that offers Fox, CBS, NBC, ESPN, and NFL Network. Let’s breakdown some of the best options:

Where can you stream almost all of the Los Angeles Rams games?

Sling TV offers a more affordable streaming service plan for all you Los Angeles Rams fans. Users can pick between the Sling Orange or Sling Blue plan for $35 per month or combine the two for $50 per month. Plus you can get 50% off your first month right now!

The Sling Blue plan is a better option if you’re looking to watch every home and away game this season, but the Sling Orange & Blue package may be the better option for the above-average sports fan looking to stream more than just football. The Sling Orange & Blue plan is one of the most comprehensive options with channel offerings from ESPN to NFL and local NBC and Fox channels.

Hulu + Live TV gives you access to an entire on-demand library of movies, shows, and originals, as well as 75+ live TV channels, including NFL games, for just $69.99 per month. You can choose the no-ad upgrade for $75.99 per month. Hulu + Live TV has you covered with a wide range of supported streaming devices and unlimited DVR. You’ll also get premier access to ESPN Plus and Disney Plus with either plan, enabling you to rewatch all your favorite games and movies.

DIRECTV STREAM is the only streaming service that offers a no commitment plan. Stream it when you want it and cancel if you’re done — with no extra fees. To see if you like the service, try the limited time five-day free trial. Once you’re ready to decide, you’ll get $40 off your first two months. For those interested in watching NFL games on every single tv and tablet in their home all at once, DIRECTV STREAM gives you the ability to watch on up to 20 screens so you’ll never miss a snap. You also get access to over 7,000 other streaming apps like Netflix, HBO Max, and more.

FuboTV is a great choice for any die-hard sports fans looking for a reliable streaming service. No matter which plan you choose, they offer major channels like beIN Sports, ESPN, ESPN2, FS1, FS2, NBA TV, NBC Sports Network, NFL Network, and NFL RedZone. Keep in mind, for the premier channels like NFL RedZone, you’ll need to choose the highest-tiered Ultimate package or include the Sports Plus add-on in your plan. You can always try out the seven-day free trial before making your decision on the Pro, Elite, or Ultimate plan.

YouTube TV is another streaming service option but with only one main plan for $64.99 per month. This plan includes 85+ channels from ESPN, NFL Network, NBC, CBS, and many more. Looking for some on-demand content? YouTubeTV has you covered. Right now, YouTube TV is also running a promotion that gives you $30 off the first three months ($10 per month), which could cover the first half of the football season.