The Green Bay Packers are counting down the days until their 2021 training camp kicks off and while there’s still uncertainty surrounding Aaron Rodgers, Lambeau Field may be filled with renewed optimism for his return.

Rodgers sat out mandatory minicamp just a few months after requesting a trade. The reigning NFL MVP remains frustrated about the organization’s culture and the front office’s focus on building for the future rather than taking a win-now approach.

Between threats of retirement, hosting Jeopardy!, opting out of the 2021 season, or just skipping it entirely, the 27-year-old quarterback has exercised every avenue to force a trade. But with Green Bay refusing to move him, rejecting every inquiry it received, it seems Rodgers has realized where things stand. 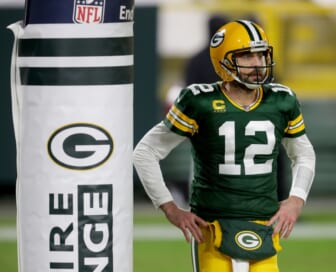 Following his win in “The Match” against Tom Brady, the Packers’ star shed some light on when he’ll decide if he is playing football this fall. ESPN’s NFL insider Jeremy Fowler shared Monday on “Get Up” that Green Bay took notice of its quarterback comments.

“The Packers are hopeful and after asking around. I sense some encouragement out there from the Packers. I asked a source whether Rodgers’ comments breed optimism, they said ‘I really hope so.'”

The future Hall of Fame quarterback doesn’t have a lot of options. If he skips training camp, he receives a $50,000 mandatory fine for each day missed and loses a portion of his salary by being unavailable for the preseason. If he sat out the entire 2021 season, Rodgers would lose out on more than $30 million.

A three-time MVP, he did everything in his power to try and force a trade. But the Packers made it clear immediately that a move wouldn’t be considered. This team wants Rodgers as its quarterback for the 2021 season and it won’t let him play anywhere else this fall.

Given his relationships with coaches and teammates are strong, there’s more incentive for Rodgers to take the field for Green Bay this season. He makes this team a Super Bowl contender, one that came very close to beating the Tampa Bay Buccaneers.

Ultimately, it would be a surprise if Aaron Rodgers isn’t under center for the Packers in Week 1 against the New Orleans Saints. Once the season is over, no matter how it ends, Green Bay can make him the most coveted trade candidate in 2022.