The Green Bay Packers are obviously in a pickle when it comes to Aaron Rodgers, and there’s even talk he could opt out of the 2021 NFL season — if he’s not traded.

Of course, Green Bay’s front office has no one to blame but themselves. They traded up to acquire Jordan Love in the first round of the 2020 NFL Draft without giving Rodgers a heads up. the veteran responded with an MVP season and a second straight NFC Championship Game appearance.

Our 2021 season forecast for the Packers, seen above, projects that Green Bay will finish with a 12-5 record and win the NFC North once again. However, that’s operating under the assumption that Rodgers starts.

What if Rodgers does, in fact, sit out this year and Love is thrust into the starting role? Here’s a closer look at their numbers, key factors in Love’s development, and a bottom-line prediction for how he’ll do if he starts in 2021.

That’s about as good as it gets. Rodgers fell just short of his own single-season record for passer rating, almost a decade after setting that standard.

Even at the age of 37, Rodgers is showing no signs of decline some had suspected prior to the 2020 campaign. We know the Packers certainly thought he was diminishing as a player. Otherwise, why rock the boat and draft Love so high? 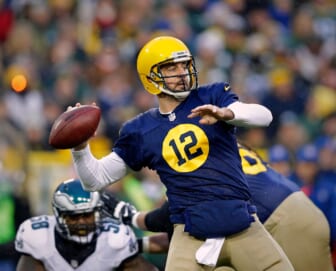 The big regression Love suffered in his final season at Utah State is more a function of a completely depleted supporting cast around him. However, because he was trying to play hero ball too often, Love’s decision-making declined in a big way.

Love was always going to need at least a year to sit behind Rodgers and learn even under the best of circumstances. Due to the COVID-19 pandemic, his shortened offseason schedule last year did him no favors.

Playing within structure of the offense

Part of the reason Love gets compared to Patrick Mahomes is his arm talent and the unique improvisational element he brings to the gridiron. Being stacked up to Mahomes is hardly fair, yet some of Love’s skill set justifies it.

The difference is Mahomes has proven he can be disciplined to stand in the pocket and win from there, which is why the Kansas City Chiefs’ passing attack is nearly unstoppable. That’s the area Love regressed the most in his last college season.

Again, Love was not put in position to succeed in 2019. The problem is that he developed bad habits, stopped trusting his reads as much, and used his superior arm power to either take ill-advised risks or try to make the big splash play. It resulted in some flat-out bad tape. 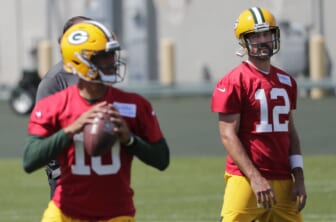 Those who argued it wouldn’t impact his confidence going forward had to be eating their words at least a little bit when Love failed to rise above No. 3 on the depth chart as a rookie.

Now that Rodgers has been absent throughout the offseason program, Love is getting all the reps. He’s shown flashes of promise. Can he succeed in coach Matt LaFleur’s scheme and make the proper reads? He’s set up nicely to do so with the Packers. It’s a matter of actually executing.

To circle back to Mahomes, he’s proven that perfect mechanics are overrated. Making difficult off-platform throws can actually be a huge edge for quarterbacks, and Love has shown a penchant for doing that in the past. Heck, Rodgers is a master at it himself.

Here’s the issue: Love can’t skate by with those flaws all the time until he proves he can, as mentioned, execute the basics of LaFleur’s offense. Otherwise, he’ll run the risk of playing too much backyard football and continue to form poor mechanical habits. 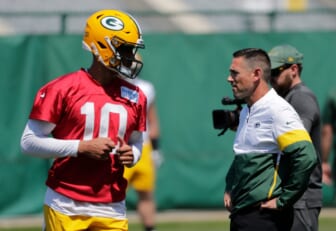 In order to make the so-called “easy” plays in the NFL, sound footwork and throwing motion are critical. Love has a compact, explosive delivery. It’s the lower body where his mechanics leave something to be desired, which leads to scattershot accuracy.

Rodgers is so pinpoint with his ball placement. Much of that comes from his athleticism and knack for squaring up and forming a solid base to throw accurately from. Mastering that comes from tons of live experience and trial and error.

The off-schedule plays are exciting, and Love is capable of pulling those off on occasion. What could really hang him up is lackluster fundamentals.

Chemistry and buy-in with Packers’ pass-catchers

Another key to Love’s growth ties into the other two factors, but it’s more of a leadership and intangible aspect of his progress as an NFL player.

Rodgers is obviously the face of the franchise and leader of the locker room. Green Bay’s top five wide receivers, including No. 1 wideout Davante Adams didn’t show up for OTAs one day in late May to stand in solidarity with their superstar QB.

Not only does that hamper Love’s ability to gain chemistry with them, but it also gives him no chance to establish a good personal rapport with his teammates. That’s not a great look for anyone involved, even if Rodgers has clearly been mistreated throughout this whole saga. 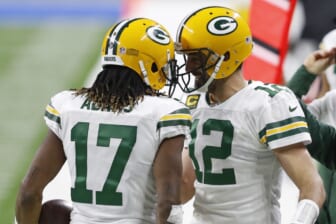 If he shows a mastery of LaFleur’s verbiage, has strong attention to detail, runs the foundation of the offense well in training camp and keeps his mechanics tight, Love will inevitably endear himself to his teammates.

On the other hand, should Love still exhibit the flaws that have plagued his game with little indication he’ll improve any time soon, much less before Week 1, things could go south in a hurry. Adams may have one foot out the door since he’ll be a free agent in 2022.

Getting teammates to believe in him will feed Love’s confidence that he can be “the man” and credibly lead the Packers in the post-Rodgers era.

To be clear, we’ll update our full-on schedule outlook for the Packers and our NFL playoff predictions if it does come to pass that Rodgers either leaves Green Bay via trade or sits out the upcoming season. This serves as a preliminary forecast and is more of a deep dive specifically into Love’s side of the story.

Love was considered a huge wild card in the decorated 2020 QB draft class that produced Joe Burrow, Justin Herbert and Tua Tagovailoa. That’s part of the reason he fell to 26th overall, but his upside was why the Packers traded up to get him.

Since he’s so far removed from playing his last official game, Love is even more of an unknown commodity. He’s got the advantage of a solid defense to complement him, a stellar rushing attack led by Aaron Jones and AJ Dillon, and a perpetually stout offensive line to protect him.

The Packers have always been a conservative organization, but the one time they got bold by trading up for Love in the draft, it backfired. They couldn’t have handled the relationship with Rodgers any worse upon making that decision.

None of this is Love’s fault. In some ways, learning behind one of the best QBs to ever play seems like it should be a great situation on paper. Unfortunately, the way things went down, Love couldn’t have landed in a much worse spot.

With championship expectations, the pressure of being an encore to Brett Favre and Rodgers, plus a fandom that will be scrutinizing his every move, Love is in danger of a rocky start to his NFL playing career.

We’re not too bullish on Love thriving with all the Rodgers drama swirling. A losing record is probable, which could trigger an offseason of panic moves and an overhauled organizational structure for Green Bay.