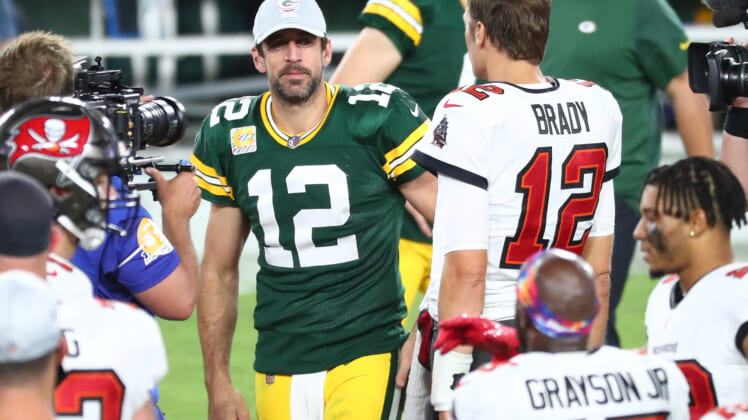 There was no comeback for Tom Brady in The Match.

And no hints from Aaron Rodgers about where he’ll play during the upcoming NFL season — despite some goading on that subject during the nearly six-hour round.

The pairing of Rodgers and Bryson DeChambeau proved too much for Brady and Phil Mickelson in The Match on Tuesday at The Reserve at Moonlight Basin in Big Sky, Mont.

Brady, whose golf balls were decorated with his Super Bowl-winning numbers (XXXVI, XXXVIII, XXXIX, XLIX, LI, LIII, LV), sounded confident even while trailing on the back nine.

“We got them right where we want them,” Brady said, figuring this was a more compelling storyline compared to holding a late-round lead. “Everyone is going to talk about us being down three with five to play.”

Rodgers and DeChambeau, the 2020 U.S. Open champion, won 3 and 2 in the modified alternate-shot format in the made-for-TV celebrity event on the Jack Nicklaus Signature Course located at 7,500-feet elevation. 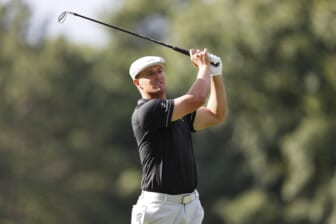 Nothing seemed to faze Rodgers, who was hounded from the playing group and the TV studio crew about his future with the Green Bay Packers.

“Aaron, who’s leader of the Packers — I think,” Brady said.

Rodgers rebutted at one point in apparent reference to Brady’s age: “I’m just talking to him to see if he’s still playing.”

By the 16th hole, when Brady-Mickelson were in a desperate situation and Brady stood over a long putt, Mickelson made reference to Green Bay’s decision in the NFC Championship Game against Brady’s Tampa Bay Buccaneers.

“I equate this to fourth-and-3 and we’re down eight,” Mickelson said. “I don’t think we should kick a field goal. We should go for it.”

The words didn’t matter. Brady rolled a nice putt but missed. Then Rodgers rolled in the match-clinching putt.

Earlier, Rodgers didn’t even budge when television cameras provided footage of a bear on the course — with that leading to a conversation topic as to whether Rodgers would be taking snaps against Green Bay’s division rival, the Chicago Bears, this year.

Brady and Rodgers tossed a football next to the 11th tee box.

The Rodgers-DeChambeau pairing won the first three holes of the back nine to break a tie. Rodgers had two of the birdie putts.

“I don’t know why I brought my putter,” DeChambeau said. “This dude is making everything. … This guy just rolls it in every time.”

At one point, the Rodgers-DeChambeau team used Rodgers’ tee shots on six of seven holes.

There were interesting twists during the round. For instance, the often deliberate DeChambeau pointed out that the Brady-Mickelson team was disrupting the pace of play as Mickelson was giving extensive putting instructions to Brady.

DeChambeau chipped in on the first hole.

With the match ending after 16 holes, the big-hitting DeChambeau never got to attack the 777-yard 17th hole.

Mickelson and Brady were a repeat pairing from a previous event that resulted in a loss to Tiger Woods and Peyton Manning.