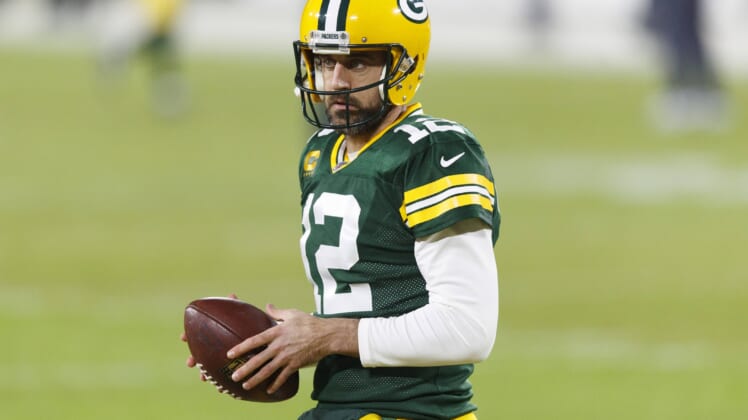 The situation between reigning NFL MVP Aaron Rodgers and his Green Bay Packers might be coming to a head. It was reported earlier in the week that Rodgers is not happy with the organization and wants to be traded.

When said reports broke immediately ahead of the 2021 NFL Draft on Thursday, the Packers released a statement indicating that they had no intention of trading one of the greatest quarterbacks of all-time. The backdrop here were rumors linking him to the San Francisco 49ers, among other teams.

Now that multiple quarterback-needy squads have solved their situations under center via the first round of the draft, there’s no telling what is going to happen with Rodgers.

But this latest piece of information is interesting. According to NFL Media’s Ian Rapoport, Rodgers is seriously considering retirement to become the full-time host of “Jeopardy.”

This is not a drill. And it’s absolutely stunning on the surface. As reports of Aaron Rodgers’ unhappiness with Green Bay became public record on Thursday, other suggestions came out that the future Hall of Fame quarterback was a top candidate to become the full-time host of “Jeopardy” after taking on that role in a guest-host capacity earlier in April.

Regardless of what happens between Rodgers and the Packers moving forward, it’s clear that he does not want to play for the team again. Short of Green Bay offering him a massive extension or agreeing to trade the star quarterback, he could hang his cleats up while still in the midst of his prime.