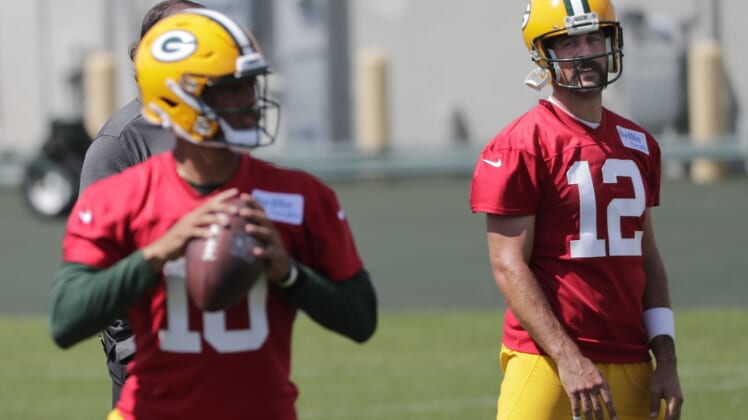 The Green Bay Packers shocked the NFL world by using the 2020 NFL Draft to prepare for the future, just weeks after Aaron Rodgers helped push the team to the NFC Championship Game. Fast forward a year later, with Rodgers coming off an NFL MVP and one of the best seasons in his career, Green Bay’s future is shaky.

Green Bay’s general manager Brian Gutekunst made a bold decision on draft night, sending its first- (No. 30) and fourth-round pick (No. 136) to the Miami Dolphins for the 26th pick. The decision to trade up for Love shocked football fans, especially after word came out that no other team wanted to move up for him. Not only did the pick draw criticism and spark speculation about Rodgers’ future it also upset the future Hall of Fame quarterback.

Rodgers responded with a phenomenal season, leading the NFL in passer rating (121.5), QBR (84.4), touchdown passes (48) and completion rate (70.7%). However, the holes that Gutekunst didn’t address in the 2020 offseason proved costly in another NFC Championship Game loss.

Following the defeat, Rodgers publicly questioned his future with the franchise. Many believe he either wanted a contract extension or for the front office to surround him with more talent in an effort to win a Super Bowl. But once again, there was chatter about a potential trade.

The Packers made it clear they wouldn’t even consider it. CEO Mark Murphy said the club would be “idiots” if it traded the franchise star and head coach Matt LaFleur shut down trade rumors. While the Packers seem committed to Rodgers for the 2021 season, the lack of activity this offseason paints a different picture for his future.

Tight against the NFL salary cap, Green Bay made a series of cuts and restructured contracts for David Bakhtiari, Preston Smith, Za’Darius Smith and Adrian Amos. The moves were enough to get under the $182.5 million ceiling, even after re-signing Aaron Jones. However, the team lost All-Pro center Corey Linsley to the Los Angeles Chargers.

While Gutekunst said the Packers wouldn’t be major players in free agency, he hinted that one big addition could be made. Given the team’s alarming need at cornerback, with the likes of Adoree Jackson, Kyle Fuller and Casey Hayward available, quality options are out there. But it seems the Packers are citing the players’ asking price as a reason they can’t land an upgrade. It’s the same reason they missed out on J.J. Watt.

It’s worth noting, though, Green Bay has options to create more cap flexibility. As ESPN’s Dan Graziano noted, reworking Rodgers’ contract would give the team a lot more money to spend this offseason. Furthermore, it would provide Rodgers with a commitment well past the 2021 season.

While his contract doesn’t expire until 2024, Green Bay is theoretically in its last season of true commitment to Rodgers. If the three-time NFL MVP is traded next offseason, the Packers free up $22.6 million in cap space and are left with just $17.2 million in dead money.

That kind of financial flexibility goes away with a contract restructure or extension, making it even more likely that Rodgers’ time in Green Bay could be nearing a conclusion.

Why the Packers are making a bad bet on Jordan Love

Heading into the 2020 NFL Draft, there was some knowledge that rookies wouldn’t have a normal offseason due to the pandemic. But Green Bay traded up for Love anyway, knowing that he was a young quarterback who needed significant time and reps to develop.

With rookie camps erased, Love showed up to training camp and didn’t leave a favorable impression on those who watched him practice. He also didn’t have the benefit of preseason games, wiping out chances for him to implement what he was taught and to learn from his mistakes.

Ultimately, Love never even made the active roster in his rookie season. He spent the entire year on the scout team and couldn’t beat out Tim Boyle to become Rodgers’ backup.

Love will be given that job this year, largely by default given the team’s investment in him. He will also realistically get three preseason games to put his talents on display, a test for coaches to see if he really can correct the bad habits and poor mechanics that left many viewing him as a Day 2 talent.

Here’s the problem for the Packers. They will have the next year to decide if Love is ready to be a starting NFL quarterback in 2022. The team’s assessment of him will largely be determined on how he performs in light practices and against backup players in preseason games.

Green Bay could keep Rodgers in 2022, a wise decision based on how well he is playing. But that puts the organization in another predicament.

The Packers must decide on Love’s fifth-year option after his third season. If they exercise the additional year, his salaries for the next two seasons become fully guaranteed. Furthermore, thanks to the new CBA, a fifth-year option would likely cost the team $20-plus million. Keep in mind, this call would be made without ever seeing him play meaningful snaps in a regular-season game.

One of the biggest benefits of drafting a quarterback in the first round is his low salary allows a general manager to build a great cast of talent around that passer. Realistically, Green Bay will have wasted at least three of the ‘prime’ years financially from Love’s rookie contract.

Of course, this is all operating with the assumption that Love develops into a starting quarterback. If he doesn’t, the baffling decisions made by Gutekunst in 2020 might have not only cost Rodgers a second Super Bowl, but set this franchise back for years.

For more news, rumors and analysis on the Green Bay Packers, click below.