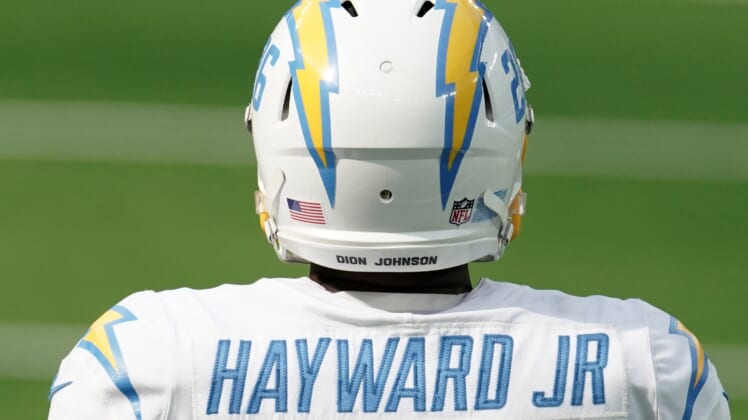 Sep 27, 2020; Inglewood, California, USA; Los Angeles Chargers cornerback Casey Hayward (26) wears the name of Dion Johnson on the back of his helmet against the Carolina Panthers at SoFi Stadium. The Panthers defeated the Chargers 21-16. Mandatory Credit: Kirby Lee-USA TODAY Sports

Hayward has been one of the most underrated cornerbacks in the NFL since he entered the league as a second-round pick in the 2012 NFL Draft. However, coming off a poor 2020 season, the decision to cut the 31-year-old cornerback was easy for Los Angeles. By releasing him now, the Chargers created $9.75 million in cap space, money that can be spent to build an offense around Justin Herbert.

While Hayward’s time in Los Angeles is over, it shouldn’t be long before multiple NFL teams are calling his agent with interest in signing him. So, let’s dive into some of the potential landing spots for the star cornerback.

It would be fitting if Casey Hayward ended his career where it all began. The 5-foot-11 corner broke onto the scene, in Green Bay. He was named to the Pro Football Writers Association’s All-Rookie Team in his first season, snagging six interceptions and standing out in coverage. Injuries sidelined him in 2013, but he returned to form with outstanding cover skills in 2014.

There was some bad blood between Hayward and the Packers in 2017, due to frustration about not receiving a contract offer in free agency the previous year. But things worked out, with Hayward landing two contracts worth nearly $50 million across five seasons as the Chargers’ top cornerback.

Nearing the end of his career, Hayward would fill a need in Green Bay’s secondary. The Packers are desperate for a No. 2 cornerback and a slot defender, Achilles’ heels that cost them in the NFC Championship Game. If Hayward is healthy and motivated, he could help this team reach the Super Bowl. Bringing him back might make Aaron Rodgers a bit happier, too.

Kansas City’s biggest need resides on the offensive line, but we also can’t forget how bad its secondary looked at times in 2020 and Super Bowl LV. The opportunity to compete for the Lombardi Trophy is appealing for a lot of veterans, especially those who don’t even have a ton of experience making It to the playoffs.

Just looking at Hayward’s stats from the 2020 season, he doesn’t seem like an upgrade. He received a 59.5 coverage grade and allowed a 92.6 passer rating when targeted, according to Pro Football Focus. It’s possible that his days on the outside are over. But this is the same corner that had an 83.0 coverage grade in 2019 and made the FF 2010’s All-Decade Team. If there’s something left in the tank, he would be a fantastic addition for the Chiefs.

The Cardinals have already proven they are willing to get aggressive. Many would argue they overpaid J.J. Watt, but Arizona offered him the contract that convinced him to sign. The pass rush in the desert will be phenomenal, but this team is lacking talent at cornerback and Hayward can fix that.

Even in a down year, Hayward was significantly better than Patrick Peterson. With an improved pass rush giving opposing quarterbacks less time to throw, that’s something Hayward can take advantage of in 2021. The versatility to line up in the nickel or on the outside, shadowing a No. 1 receiver or staying on one side, would be appreciated by defensive coordinator Vance Joseph. If the Cardinals are serious about contention, they should pursue Casey Hayward.

Few teams are more desperate for help at cornerback than the Cowboys. Bringing in Dan Quinn as defensive coordinator should help this team, but they are still lacking a ton of talent. While the new contract for Dak Prescott is massive, it gave Dallas a lot more room than the franchise tag would have. Thus, Jerry Jones can look to NFL free agency for upgrades on the defensive side.

Money can help lure Hayward, but the Cowboys might have another advantage. When Hayward became a star in Green Bay’s secondary, Joe Whitt Jr. was the team’s cornerbacks coach. Fast forward to 2021, Whitt Jr. is now the Cowboys’ secondary coach and defensive pass-game coordinator. Plus, it would be a reunion with Mike McCarthy.

Signing Casey Hayward would give the Cowboys a ton of flexibility. They wouldn’t absolutely have to draft a cornerback with the No. 10 overall pick. Even if they did, Hayward could play the slot or Trevon Diggs could slide into that spot. Coverage will be crucial for this defense to rebound next season and Hayward makes a ton of sense for this team.