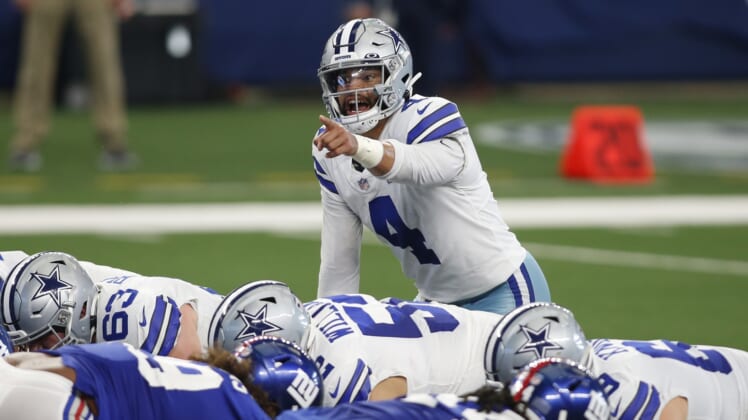 It’s been 18 months in the making. Contract negotiations taking place on a near never-ending loop. But it’s finally here. The Dallas Cowboys and Dak Prescott have agreed to terms on a new contract.

In absolutely shocking news, the Cowboys made the announcement themselves on Monday. This keeps the star quarterback off the NFL free agent market and eliminates what would have been a massive 2021 salary cap hit for Dallas.

“The Cowboys announced Monday night that Prescott and the club have agreed to terms on a new contract. Terms have not been disclosed; further information and details will be released at a formal press announcement on Wednesday, the club said in a press release,” the Cowboys announced Monday. “Both sides have agreed to terms before Tuesday’s tentative deadline to place a second straight franchise tag for Prescott.

As noted above, there’s been drawn-out negotiations between the star quarterback and his team. Things seemed to take another turn once Prescott suffered a devastating ankle injury five games into the 2020 season.

It’s obvious that the two sides did what they could to get something done before the NFL franchise tag deadline. If that did not happen, the Cowboys would have had to pay out $37.7 million against the 2021 NFL salary cap. Given their financial situation, this seemed to be a less-than-ideal scenario.

Terms of Dak Prescott contract extension with the Dallas Cowboys

According to ESPN’s Adam Schefter, Prescott’s contract will pay him $160 million over four seasons. He nets a record $126 million guaranteed while averaging $42 million per season over the course of the first three years of the contract. That’s a massive pay day. Absolutely massive.

As for the further information coming from Prescott’s extension, the remaining numbers are absolutely stunning. He gets a $66 million signing bonus and will earn a total cash amount of $75 million in Year 1. It remains to be seen how the Cowboys’ 2021 NFL salary cap will be impacted by this. But it’s safe to assume that Prescott’s cap hit is going to be nowhere near what it would have been under the franchise tag.

Prescott, 27, has more than earned it. Over the course of 69 career starts, the former mid-round pick from Mississippi State has put up 130 total touchdowns against a mere 40 interceptions. Back in 2019, Prescott passed for north of 4,900 yards with 30 touchdowns and 11 picks.

There’s going to be a ton of financial ramifications that comes with this massive Dak Prescott news. What we do know is that he’s finally locked up in Big D. That’s no small thing for the Pro Bowl signal caller.