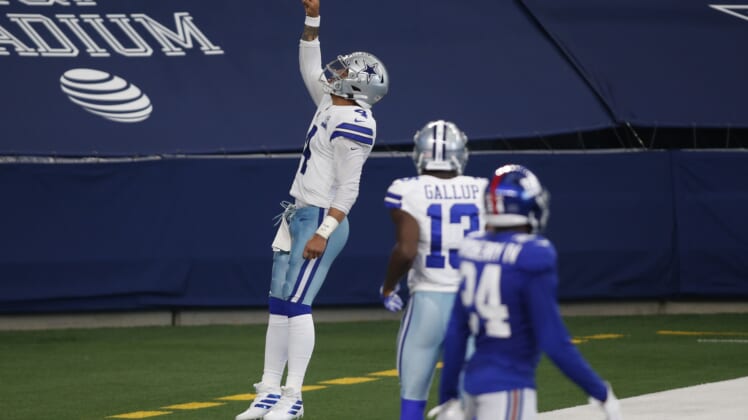 The Dallas Cowboys and Dak Prescott both want to sign a contract extension this offseason. With the deadline to apply the franchise tag approaching, though, the two sides are quickly running out of time.

For the second consecutive offseason, Dallas finds itself in a challenging spot and it will be operating with even less leverage this time around. The Cowboys failed to sign Prescott to a long-term deal last summer, letting him play out the 2020 season on the $31 million franchise tag.

After backing himself into a corner, Jerry Jones is running out of options. With his franchise quarterback holding all the cards in contract negotiations, things are not surprisingly working in the team’s favor this time around.

During an appearance on ESPN’s Get Up, NFL reporter Dan Graziano provided an update on contract talks between Prescott and the Cowboys. The two parties discussed a long-term extension this week, going over potential structures on Tuesday, but they are not close to a long-term deal.

This comes a few days after some feelings of optimism in Dallas. It seems both sides are in a better situation than they were last offseason, but there is still a lot of ground to be covered before anyone signs on the dotted line of a multi-year contract.

Given the state of negotiations, the exclusive franchise tag is inevitable. Under NFL rules, Prescott will receive more than $37 million fully guaranteed next season by playing under the tag for the second time. If this reaches the unprecedented situation of a third tag being applied in 2022, he would make more than $52 million guaranteed next year.

Related: Troy Aikman weighs in on uncertain future for Dak Prescott with Cowboys

Needless to say, that’s an outcome Dallas can’t afford. It’s already in a difficult spot financially, working against the lowered NFL salary cap. Once Prescott signs his exclusive tender, which would happen in July if the two sides can’t agree on a long-term deal, the Cowboys could be pushed over the cap ceiling.

Making $37 million in 2021, Prescott can set the starting point for his multi-year contract even higher. The only way his cap hit can be lowered is through an extension, spreading out the guaranteed money over multiple seasons. So, Jones will likely need to start with a contract offer at $38-plus million annually.

It would put Prescott right behind Deshaun Watson ($39 million AAV), a figure he likely wants to surpass. He wants to become the second-highest-paid quarterback in the NFL, below Patrick Mahomes ($45 million AAV).

Dallas could have signed him for cheaper last offseason. Prescott wanted a four-year deal worth approximately $35 million per season, but Jones wouldn’t budge off a five-year contract. It proved to be costly, with an extension not reached and the asking price now climbing even higher.

The Dallas Cowboys now face a decision. Either they cave on a shorter deal and meeting the required annual salary or Dak Prescott walks in free agency next season. Given all of the holes on the defensive side and the aging offensive line, both outcomes will cause problems.