Deshaun Watson: How the troubled NFL star will do with the Cleveland Browns

Deshaun Watson trade rumors came to a head Friday with shocking news that the Cleveland Browns have acquired the star quarterback from the Houston Texans in an absolutely huge blockbuster deal around the NFL world.

This trade has been a year in the making with Watson, a three-time Pro Bowler, demanding to be moved by the Texans last winter. Once allegations from north of 20 women of sexual misconduct came up, it became obvious that the former Clemson star would not be traded.

Instead, Watson sat out the entire 2021 campaign as the legal situation played out. Once authorities opted against pressing criminal charges against Watson, it cleared a lot of things up. Hence, why the Browns made a move for him.

This is absolutely wild. In addition to earning the second-highest average annual salary behind Aaron Rodgers, Watson’s new extension with the Browns pays him a guaranteed rate of $230 million. That’s $80 million more than the previous record set by the aforementioned Rodgers.

Houston is still on the hook for $16.2 million of Watson’s $27 million signing bonus. The Browns won’t have to pay into that in 2022. It makes things rather interesting from a financial perspective. Just look at his cap hit compared to other quarterbacks in 2022.

Will Deshaun Watson be suspended?

Watson had remained away from the Texans throughout the entire 2021 season after requesting a trade from the downtrodden organization. Once north of 20 women came forward and accused him of sexual misconduct, the Texans decided on keeping Watson inactive throughout the campaign.

There’s still a decent chance that Deshaun Watson will be suspended by the NFL. The league works under its own legal system and has in the past suspended players without criminal charges being filed (more on that below).

However, it seems likely that Cleveland knew what punishment (if any) Watson would face from the NFL before making this trade. Commissioner Roger Goodell and Co. are conducting their own investigation outside of the parameters of the American legal system.

“Obviously, the police have been investigating, and we don’t have access to all of that information at this point in time. We pride ourselves on not interfering in that and in being as cooperative as we can in order to get all the facts. I think that process is still ongoing.”

The best known comparison would be recently-retired former Pittsburgh Steelers quarterback Ben Roethlisberger. The two-time Super Bowl champion was accused of sexual assault twice during a 17 month span back in 2009 and 2010 — once in Lake Tahoe and the other time in Georgia.

Big Ben was not charged in either case due to a lack of DNA evidence and other factors. However, the NFL opted to suspend him six games for the 2010 season before ultimately lowering said suspension to four games.

Back in 2017, Dallas Cowboys running back Ezekiel Elliott was suspended six games by the NFL after allegations of domestic violence were levied in his direction. Despite a lack of criminal chages, the league used its power to punish Elliott. It created a firestorm between the NFLPA and NFL with the former alleging abuse of power on Goodell’s part. 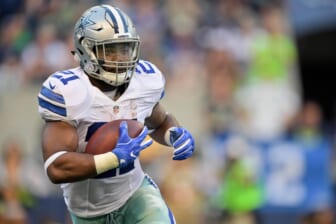 These two instances did not impact the star players too much on the field. Roethlisberger returned from suspension in 2010 to lead the Steelers to a 9-3 record. He threw for 3,265 yards with 17 touchowns and five interceptions. Pittsburgh ended up losing to the Green Bay Packers in the Super Bowl that season.

As for Elliott, he led the NFL with 98.3 rushing yards per game once returning from his league-mandated six-game suspension back in 2017. The following year saw Zeke lead the league in attempts (304), rushing yards (1,434), and total touches (381).

What the Cleveland Browns can expect from their star QB?

On the field, there’s no reason to believe a potential suspension would impact Watson too much. The 26-year-old signal caller has been elite since Houston made him the No. 12 pick in the 2017 NFL Draft.

Watson led the NFL with 4,823 passing yards and 12.6 yards per completion in his final season with the Texans back in 2020. He did this despite playing on a talent-stricken team.

Watson now joins a Browns team that includes star running back Nick Chubb as well as new No. 1 receiver Amari Cooper. He has more talent on offense than he did at any point during his tenure with the Texans.