A Deshaun Watson trade may not be coming anytime soon, with the legal situation surrounding the Houston Texans quarterback reportedly causing enough concern that both sides might have to wait for something to happen next year.

Watson demanded a trade in January and the Texans have made him a weekly inactive since Week 1 as they explored their trade options. Originally, Houston wanted to keep the Pro Boel quarterback, but it quickly became clear everything going on between the two sides made that impossible.

Houston eventually started becoming more receptive to ideas with the asking price becoming more open-minded. But interested NFL teams, such as the Philadelphia Eagles and Miami Dolphins, insisted on the Texans accepting conditional picks for a trade. 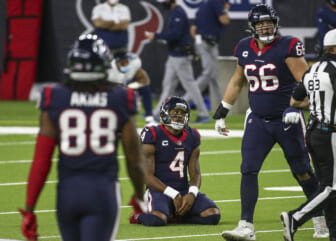 Watson is currently facing 22 civil suits, 10 criminal complaints and investigations by the FBI, NFL and Houston Police Department for allegations of sexual assault and misconduct. With so much uncertainty regarding his status for the 2021 season and a potential suspension, it seems a blockbuster deal isn’t near.

According to ESPN’s Jeremy Fowler and Dan Graziano, conversations with people around the league indicate a Watson trade isn’t likely by the Nov. 2 trade deadline.

When will Deshaun Watson be traded?

If Watson is still on Houston’s roster at 4:01 p.m. EST on Nov. 2, he will be stuck with the team for the remainder of the 2021 season. While he will not play for them, which he is refusing to do, he would still get paid and count towards the active roster. 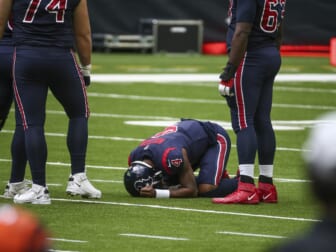 In the event he’s still with the Texans, a trade couldn’t be made until the start of the 2022 NFL league year, which begins on March 16 at 4 p.m. Houston could agree to a deal with another team, but it couldn’t be officially announced until the new league year begins.

Teams are not going to rush a trade with so much at stake. While Watson’s legal team strongly claims his innocence and believes all investigations will reach the same conclusion, everyone in the NFL is aware of the gravity that comes with 22 accusers coming forward publicly.

The legal investigations could take several more months and the NFL won’t get involved until it can operate independently without interfering. Once that happens, Watson will speak to league investigators and he must also deal with the civil suits.

Plenty of general managers certainly attempted to “buy low” on a player viewed as one of the most talented quarterbacks in the NFL. But with the Texans still seeking multiple first-round picks and Watson not in the clear legally, this story isn’t going away in the next few weeks.