The Miami Dolphins have emerged as frontrunners for a Deshaun Watson trade, but the Houston Texans’ asking price and Watson’s legal issues might prevent a deal from happening in the immediate future.

Reports surfaced Saturday that multiple NFL executives expected Watson to be traded in the coming days. A short time later, word spread that the Dolphins were the leaders to land him and other interested teams were backing off.

It came as a surprise at a time when Tua Tagovailoa is generating a lot of buzz this summer. As he is playing well, Watson is under investigation by the NFL, the Houston Police Department, the FBI and is the subject of a grand jury investigation. 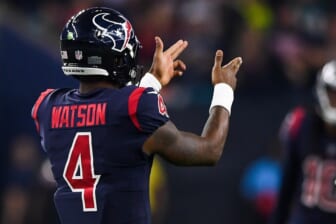 According to Barry Jackson of the Miami Herald, the Dolphins remain intrigued at the possibility of acquiring Watson but not at the high asking price Houston is sticking by.

Will Deshaun Watson be traded to the Dolphins?

Keep in mind, the price is reportedly higher for Miami than other teams. Reports surfaced over the past week that Houston wants more, specifically three first-round picks and two second-round selections, from an AFC team for Watson.

Watson does have some power in this situation. As part of his contract, with the financial terms kicking in next year, he can block or approve a trade to another team. As of now, his strong preference is playing for Miami.

But no team, even with a roster capable of already reaching the playoffs, is willing to meet that price for Watson right now. The Texans could hold him until his legal process unfolds, but any team acquiring Watson would want him to play immediately.

The NFL hasn’t placed Watson on its Commissioner’s Exempt list largely because there are still criminal investigations ongoing and the league has yet to interview him. Because the Texans are willing to sit him, there’s no pressure for the league to make a decision. But if the Dolphins acquire him, he could immediately be placed on paid leave.

Any stay on the exempt list wouldn’t count toward a future suspension. So, there’s a chance he could face a lengthy ban if the NFL’s investigation concludes he violated the league’s personal conduct policy.

If the Texans bring their price down significantly or are willing to accept conditional picks based on his availability in the next two seasons, a trade could happen quickly. For now, no team is willing to take on the risk at such a high price.