Watson, 26, sat out the entire 2021 season after requesting a trade last spring. Allegations of sexual misconduct levied in the quarterback’s direction from north of 20 women also played a role in Watson’s absence.

Now that Culley is out of a job after just one season and with the Texans looking for a new head coach, some might wonder what this means for Watson.

Right now, things seem unchanged on the quarterback’s front. However, that likely won’t be the case as the eight NFL teams currently with head-coach vacancies fill them up — the Texans included. Below, we look at what the Texans’ coaching change means for Watson moving forward.

Flores is now a free agent after the Miami Dolphins shockingly fired him following two consecutive winning seasons. The respected defensive mind is already set to interview with the Chicago Bears and is expected to draw a ton of interest.

As for Watson, reports indicate that he’d love to play for Flores. That was the case leading up to the November NFL trade deadline with a deal between the Texans and Dolphins falling apart at the last minute.

Interestingly enough, it wouldn’t be a huge surprise if Houston kicked the tires on hiring Flores. He worked with Texans general manager Nick Caserio for years in New England. We also know that Caserio will look to use his connections when conducting interviews. A report Thursday concluded that current Patriots linebackers coach Jerod Mayo is a leading candidate to replace Culley in Houston. Why not see if hiring Flores changes Watson’s stance? At the very least, run it through the quarterback’s camp.

“For those wondering on QB Deshaun Watson and the Texans—I wouldn’t expect this to change his desire for a trade,” Sports Illustrated’s Albert Breer noted Thursday. “He never had an issue with David Culley, as far as I know. Culley actually managed the situation well. Watson’s issue always has been with ownership.”

This makes all the sense in the world. Texans owner Cal McNair is seen as a highly divisive figure around the NFL world. Off-handed and racist remarks he made against the Asian community at the start of the COVID-19 pandemic adds another layer to this.

Watson himself has had big issues with the Texans’ brass dating back to the days of the late Bob McNair, who also made waves with some racially insensitive comments.

What does all of this mean? Watson is highly unlikely to change his stance regardless of who Houston hires to be its next head coach. This relationship is strained beyond repair, and goes from beyond the football aspect of the business.

It was noted earlier in January that the Texans’ brass would like to trade Watson ahead of March 16. A lot of that will depend on the ongoing civil cases steming from the aforementioned sexual misconduct allegations. There’s also a chance Watson will be charged criminally. However, nothing has come to light when it comes to a grand jury convening and the FBI conducting its own investigation into the allegations.

As for a potential landing spot should the off-field situation be settled to Watson’s liking, it wouldn’t be a surprise if the head coach situations around the NFL played a role. 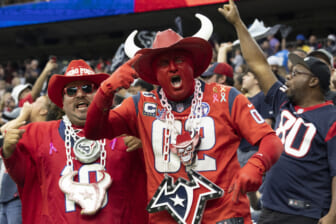 Also Read:
Ranking NFL head-coach openings: Las Vegas Raiders have a lot to offer, Houston Texans not so much

Of those eight, it’s reasonable to conclude that the Dolphns, Broncos, Giants and Raiders might be looking to add Deshaun Watson to the mix in an off-season trade. Perhaps, a new Minnesota Vikings brass looks to replace Kirk Cousins with an upgrade in Watson.

Either way, we’re not going to get much more clarity on this situation until these head coach vacancies are filled.