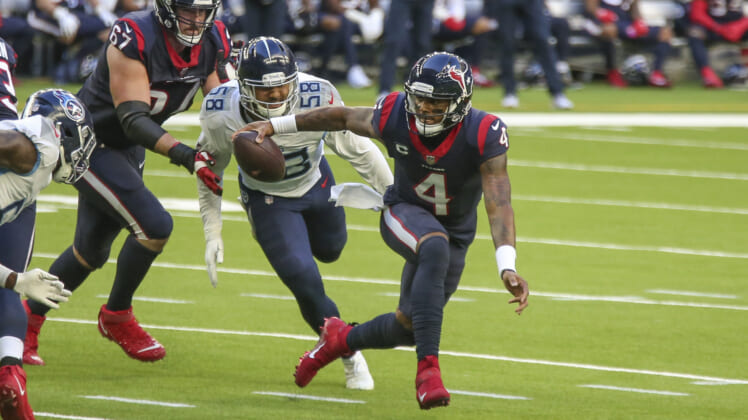 We could be on the verge of one of the biggest in-season trades in NFL history. Multiple media reports indicate Deshaun Watson could soon be headed from the Houston Texans to the Miami Dolphins.

Mark Berman of Fox 26 in Houston reports that the Texans are working toward a potential deal that would send Watson to the Dolphins. He gave a bit of a timeline on when it might happen.

“Texans are working toward a potential deal that would send Deshaun Watson to the Miami Dolphins that could get done this week. If not this week they still hope they can get it done before the Nov 2 trade deadline,” Berman reported.

Longtime Texans beat writer John McClain of The Houston Chronicle doubled down on this, also indicating that a deal could get done this week.

In case you had forgotten, Watson requested a trade early in the offseason. That was followed by north of 20 women accusing the reigning NFL passing yards leader of sexual assault and/or sexual misconduct.

Civil cases on those matters are pending. Meanwhile, the Houston Police Department is conducting an ongoing criminal investigation into the matter with a grand jury yet to be convened. As for the NFL, it is also conducting its own investigation under the guise of the personal conduct policy.

Obviously, sophomore quarterback and former first-round pick Tua Tagovailoa would head back to Houston in the deal.

From there, the Dolphins would have to give up multiple first-round picks. It remains to be seen how that might look. A lot of this will depend on whether the NFL plans on suspending Watson here in the short-term. There’s been no indication that’s going to happen.

Throughout his four-year NFL career, Deshaun Watson has thrown for 14,539 yards with 121 total touchdowns and 36 interceptions. On the field, the 26-year-old signal caller is among the best young quarterbacks in the NFL.