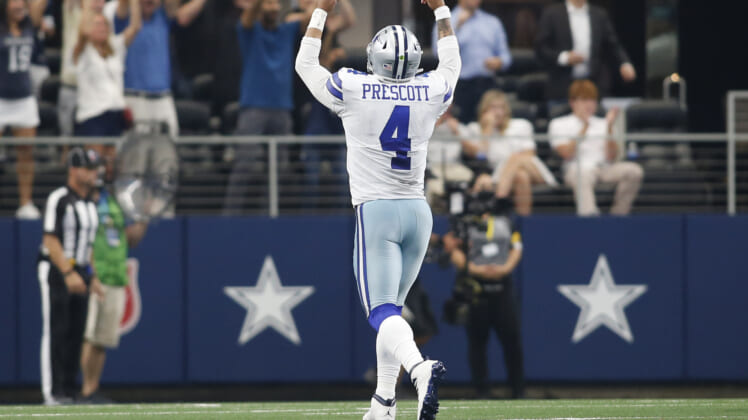 The Dallas Cowboys entered the season with a ton of questions, as many wondered if the defense and coaching staff would be good enough to even win the NFC East. Now, we’re seeing why Jerry Jones might have a shot to hoist the Lombardi Trophy this February.

Things got off to a rocky start in Dallas. Hard Knocks proved to be a flop and the excitement for quarterback Dak Prescott’s return was diminished by a lat strain. Some feared it would linger all season, putting even more strain on a rushing attack with its own concerns and a defense with holes in the secondary.

After four games, the Cowboys are one of the hottest teams in the NFL and providing evidence to suggest they can make a run at Super Bowl LVI and the Lombardi Trophy.

There’s a reason Prescott is one of the highest-paid quarterbacks in the NFL. While some questioned how a player with a 1-2 record in the playoffs could be worth $40 million per season, especially after a gruesome ankle injury, Dallas signed that deal for a reason.

In his first game back since the injury, Prescott faced a daunting challenge against Super Bowl MVP Tom Brady and a vaunted Tampa Bay Buccaneers defense. Playing on the road, without playing a single snap since that Week 5 injury in 2020, Prescott impressed.

If not for a missed offensive pass interference call, which set up the Buccaneers’ game-winning field goal Dallas potentially wins that game.

Prescott wasn’t as prolific in Week 2 against the Los Angeles Chargers, but he completed 85.2% of his pass attempts, averaging 8.8 yards per throw, and helped set up the Cowboys’ game-winning field goal.

We’ve seen the MVP-caliber version of Prescott since then. Facing a pair of top-10 defenses entering their matchups in Dallas, Prescott tore apart the Philadelphia Eagles and Carolina Panthers with outstanding efficiency.

All of this is being accomplished without Michael Gallup, the Cowboys’ No. 3 receiver who could be a No. 1 option for several NFL teams. Dallas is also playing without right tackle La’el Collins, an anchor on the offensive line.

Prescott is widely recognized as one of the smartest quarterbacks in the NFL, heralded for his ability to diagnose and react to defenses both before and after the snap. Prescott playing at an elite level already makes this team a playoff contender, but other factors bring a Super Bowl hunt into play.

The first few weeks of the 2021 NFL season haven’t been especially kind to Dallas. From August through September, the Cowboys have lost key players on both sides of the ball.

Neville Gallimore, a third-round pick in the 2020 NFL Draft, showed flashes in his rookie season. He recorded three quarterback hits and six pressures in his final six games, per Pro Football Focus. With a growing buzz about a second-year leap entering the summer, Gallimore suffered an elbow injury on Aug. 14. Currently on injured reserve, he is expected to return after or before the Week 7 bye.

That will provide a huge boost to the Cowboys’ interior pass rush, making life a little easier for Randy Gregory (10 pressures in three games). Dallas is also hopeful that Pro Bowl edge rusher DeMarcus Lawrence, on IR with a broken foot, could return in December. Considering the NFC East could be a cakewalk, the Cowboys just need Lawrence healthy for the playoffs.

On offense, reinforcements are closer to a return. Collins returns from his five-game ban during the Week 7 bye. When he hits the field in Week 8, Dallas gets to plug in a player who graded as one of the best run-blocking tackles in 2019 and who allowed just four quarterback hits in 601 pass-block snaps.

Around that same time, Gallup should be cleared to come off injured reserve after being sidelined by a calf strain. Adding a wide receiver that Cowboys’ quarterbacks had a 105.1 passer rating when targeting (PFF), will add another electrifying layer to Kellen Moore’s offense.

Many wondered how effective the Cowboys’ rushing attack would be in 2021. Ezekiel Elliott showed signs of decline in 2020 and there were also worries about the durability of the offensive line. Through four games, we’re witnessing one of the best rushing attacks in the NFL.

Of Pro Football Focus’s five highest-graded offensive linemen in run blocking, two play for the Cowboys. Tyron Smith (91.7) and Zack Martin (91.4). Meanwhile, guard Connor Williams (78.0) ranks seventh at his position and Collins (89.4 in 2019) is due back soon.

Elliott and Tony Pollard are both taking full advantage of the opportunities, whether an opponent stacks the box or focuses its efforts on stopping Prescott. Pollard (eight) and Elliott (nine) are among the leaders in the number of 10-plus yard runs. They are also both in the top-10 for average yards after contact.

Success on the ground is crucial for so many reasons. It opens passing lanes for Prescott, prevents defenses from blitzing as much and it eats time off the clock. If the Cowboys make the playoffs, limiting the number of plays the likes of Kyler Murray, Aaron Rodgers and Russell Wilson get will be pivotal.

Finally, we arrive at the biggest change from the 2021 Cowboys. A year after one of the worst defenses in the NFL rarely put this team in a position to win, defensive coordinator Dan Quinn is creating magic this fall.

After four weeks, Dallas is in a place no one thought this unit was capable of reaching. Dallas is second in the NFL in takeaways 10), with a league-high eight interceptions and two recovered fumbles.

Much of the credit goes to cornerback Trevon Diggs and defensive weapon Micah Parsons. Originally drafted as a linebacker, Parsons has moved all over the field since the Lawrence injury. The 6-foot-3 athletic marvel has played seven snaps at cornerback, 98 on the defensive line and 89 as a box linebacker. In all of that time, he has racked up 17 pressures, 11 quarterback hurries, nine run stops and holds a 75.4 PFF grade.

As for Diggs, the 2020 second-round pick just leads the NFL in interceptions (five) and is allowing the third-lowest passer rating (42.9) when targeted.

There are numbers that offer some concern. Entering Week 5, Dallas is allowing the ninth-highest yards per play (5.9) and this defense ranks 21st in opponents scoring rate (43.1%). But if you have great talent and make plays, it covers up mistakes.

While some of the recent NFL teams who led the NFL in takeaways 2018 Chicago Bears, 2019 Pittsburgh Steelers, 2020 Miami Dolphins) didn’t achieve great postseason success, they didn’t have an elite offense.

That’s what makes the Dallas Cowboys unique and gives them a shot to compete for the Super Bowl.