Super Bowl quarterback Colin Kaepernick has not played in an NFL game since 2016 — the same year he started the now well-known national anthem protests around the league.

Years before Kaepernick’s last appearance in the league, former Heisman winner Tim Tebow bombed out as a quarterback in the NFL. He last appeared in a regular season game back in 2012.

So, why are we talking about these two divisive figures years after the fact? You can thank Urban Meyer and the Jacksonville Jaguars for that. It’s been noted on a never-ending loop that Meyer is set to sign Tebow to play tight end. This is not a joke. It’s an actual thing that will more than likely happen in 2021.

As this dominates the news cycle during a slow time on the NFL calendar, Hall of Famer quarterback Kurt Warner is speaking up.

“I believe Colin should have had opportunities a long time to get another chance to play in the league,” Warner told TMZ Sports recently. “Why that hasn’t happened, I don’t know. Everybody can speculate. I don’t know if all this correlates. I don’t if one situation leads into another one.”

Warner, who starred in the NFL from 1998-2009, becomes one of the highest-profile former players to speak up on the issue. At a time when hot takes are at our fingertips due to the presence of social media, the imminent Tim Tebow signing has now brought Colin Kaepernick back into the conversation. But why?

A second-round pick of the 49ers back in 2011, Kaepernick jumped on to the scene as a sophomore in replacing Alex Smith under center in San Francisco. He ultimately led the 49ers to a Super Bowl appearance following the 2012 campaign and an appearance in the NFC Championship Game the following season.

On the field, Kaepernick saw some regression. All the while, he was set to make his name known as a civil rights icon off the field. Ahead of a preseason game against the Denver Broncos back in 2016, Kaepernick was seen taking a knee during the national anthem. It quickly became clear through comments from the quarterback that said action was in protest to racial inequality and police brutality in the United States. 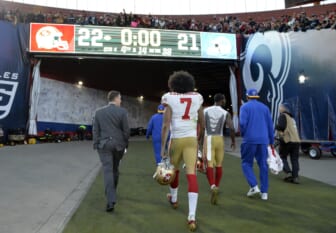 The rest is pretty much history. Kaepernick played out the remainder of the 2016 season with San Francisco before being released. He has not suited up in an NFL game since. After earning a settlement in a collusion case against the NFL and its teams, Kaepernick continued to fight for equal rights. All the while, teams simply ignored him as a potential option as lesser quarterbacks started games.

A first-round pick of the Denver Broncos back in 2010 after a stellar career under the aforementioned Urban Meyer at Florida, Tebow never panned out in the pros.

Despite a dramatic playoff win over the Pittsburgh Steelers back in January of 2012, he bombed out in Denver. All said, the highly-respected former Heisman winner threw 17 touchdowns against nine interceptions in 35 career games (16 starts). On the field, there’s little comparison between these two former quarterbacks.

Including an historical four-touchdown performance in his playoff debut against the Green Bay Packers back in January of 2013, Kaepernick posted a 4-2 postseason record during his career. That included a narrow loss to the Baltimore Ravens in Super Bowl XLVII in which he tallied 364 total yards.

Looking at these numbers, there’s no reason why Kaepernick remains unemployed and Tebow is on the verge of signing to play a completely new position.

But all things are not created equal. We can debate until we’re blue in the face why Colin Kaepernick remains unemployed and the legitimacy of his protests. What we do know is that a vast majority of teams see him as a distraction.

Despite Kurt Warner’s sentiments on the situation and what others might believe, Tebow likely being given another chance will have no impact on Colin Kaepernick. That’s the brutal truth more than four years since Kaepernick last played in an NFL game.

Regardless, the fact that these two continue to make news in 2021 is pretty remarkable.