NFL reportedly had interest in Colin Kaepernick in 2020

Colin Kaepernick hasn’t played in the NFL since the 2016 season, but that didn’t stop teams from inquiring about his availability as recently as last year.

ESPN’s Josina Anderson reported that she’d spoken with a head coach who said Kaepernick was garnering interest from the NFL in 2020:

Anderson was responding in part to the recent news that Tim Tebow is slated to reunite with his former University of Florida head coach Urban Meyer as a tight end for the Jacksonville Jaguars.

It’s been even longer since Tebow suited up in the NFL as a QB. His willingness to change positions and close ties to Meyer helped him get a foot in the door, but he still faces long odds to make the Jaguars’ final roster.

Anderson’s report and commentary are both on the mark for the most part. The temptation for some is to spin Tebow signing in Jacksonville is race-related, and discriminatory against Kaepernick.

Tebow’s connection to Meyer has nothing to do with race, or Kaepernick. The Jaguars have a huge need at the tight end position, and Tebow, unlike before, is willing to change positions to be part of Meyer’s team.

As the report here states, Kaepernick was pursued by at least one NFL team last season, even in the midst of a pandemic. There still seems to be interest in his services as a quarterback.

The similarity between Kaepernick and Tebow is the fact that they’re both lightning rods for media attention and controversy. Kaepernick generates this with social and political commentary, whereas Tebow is a conduit because of his religious beliefs.

Tebow uses his platform more to spread positivity and faith, whereas Kaepernick’s message creates uncomfortable, heated conversations, regardless of where anyone falls on the issues he’s advocating for. In both cases, a familiar dynamic, or shall we say, PR spin, plays out.

NFL owners recognize that a huge portion of their demographic doesn’t want political or religious views shoved in their faces on game days. Plenty will argue that’s an antiquated, misguided way of thinking or that it’s small potatoes in the grand scheme of things, but that’s the bottom line. That’s how it will continue to be spun.

Whether or not that’s the right way for owners to feel, or is the right action for them to take, is another matter entirely. But that’s their prerogative, unfair as it may seem to Kaepernick’s supporters.

It’s a big reason why Tebow never got another chance in the NFL until now — in an extremely small market in Jacksonville; his unique history with Meyer as leverage — and why Kaepernick still hasn’t gotten one. 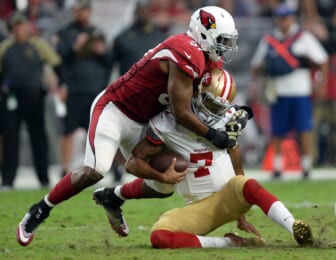 Merits of Colin Kaepernick as an NFL quarterback

There’s a ridiculous notion pushed by Kaepernick’s detractors that he can’t play quarterback in the NFL, otherwise he’d have gotten another chance to play by now.

Let’s break down how the end to Kaepernick’s career to date played out as a member of the San Francisco 49ers.

In 2014, he was under center for an 8-8 team that was completely fractured and worn out by head coach Jim Harbaugh. It got to the point where, despite three prior seasons of double-digit wins, Harbaugh was essentially ousted from the organization. 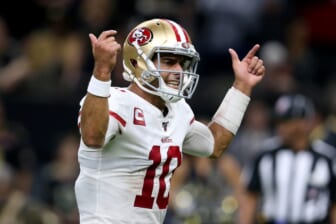 Tomsula flamed out after going 5-11. It only got worse under Kelly, as the Niners went 2-14. The former has never elevated beyond defensive line assistant since then, and Kelly has coached the UCLA Bruins to three straight losing seasons.

In that last year under Kelly, Kaepernick still ran for 468 yards, and threw for 16 touchdowns to just four interceptions in 12 games. Jeremy Kerley led the 49ers in receiving yards in 2016, with the second-highest single-season total of his career (667).

But yeah, Kaepernick can’t play in the NFL. It’s his fault, because he failed with the opportunities he was given. Sure.

As for potential landing spots, signing Kaepernick would make a lot of sense for any team who has an established veteran in place that could be on the way out soon.

Kaepernick could be a potential contingency for the Tampa Bay Buccaneers once Tom Brady retires. Maybe with the whole Aaron Rodgers fiasco happening, Kaepernick could get a shot with the Green Bay Packers.

Considering the origins of the Rooney Rule took place within the Pittsburgh Steelers franchise, maybe they could be the team to take a flier on Kaepernick, since their succession plans for Ben Roethlisberger of late have consisted of Mason Rudolph, Devlin Hodges and other awful backups.