The Jacksonville Jaguars decision to sign former quarterback Tim Tebow to play tight end has been the talk of the NFL world in recent days.

Tebow, 33, has not suited up in an NFL regular season game since back in 2012. Since then, he’s attempted to make a career of it in both the media and and baseball worlds.

Having just recently retired from being a member of the New York Mets organization, Tebow is now looking to make a dramatic return to the gridiron world under his former head coach at Florida, Urban Meyer.

There’s obviously been some push back against the Jaguars giving Tim Tebow another chance almost a decade since he last played in a meaningful game and with the former Heisman winner playing a new position. Reportedly, that now includes some within the Jaguars’ organization.

“Not everyone in the Jaguars’ building is thrilled with signing Tim Tebow,” ESPN’s Jeff Darlington noted (h/t MMQB).

Color us surprised by this shocking development. Football players and others around the NFL being upset that the Jags are giving Tebow another chance for no apparent reason outside of his relationship with the aforementioned Urban Meyer.

Is there a reason to be upset over the Tim Tebow signing?

In short, it really shouldn’t matter too much to the media. However, players and others who make a profession in the professional football world have the right to be a bit pissed off.

That’s primarily true given that Colin Kaepernick still remains blackballed by the NFL after initiating the national anthem protests back in 2016.

Since Tebow last played in a regular season game, Kaepernick has accounted for 12,209 total yards with 70 touchdowns against 27 interceptions while leading the 49ers to road playoff wins over the Green Bay Packers and Carolina Panthers. Despite this, he has not latched on with a team since the end of the 2016 season. But by all means, give Tebow and the distractions he’ll bring to the table a chance. 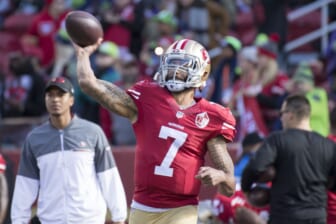 Also Read:
NFL reportedly had interest in Colin Kaepernick in 2020

At the very least, this is what some are thinking behind the scenes. That could include certain members of the Jacksonville Jaguars organization.

This is something that has been repeated on a never-ending loop among some within the sports world since the Tebow signing was reported on Monday.

As it stands, we’re intrigued to see how the Tim Tebow experiment works out in Duval. More power to him if he succeeds.

All the while, a Super Bowl quarterback in Colin Kaepernick waits for another job. Despite the NFL admitting it handled his national anthem protests in the wrong manner and showing support for Black Lives Matter, that’s unlikely to happen.