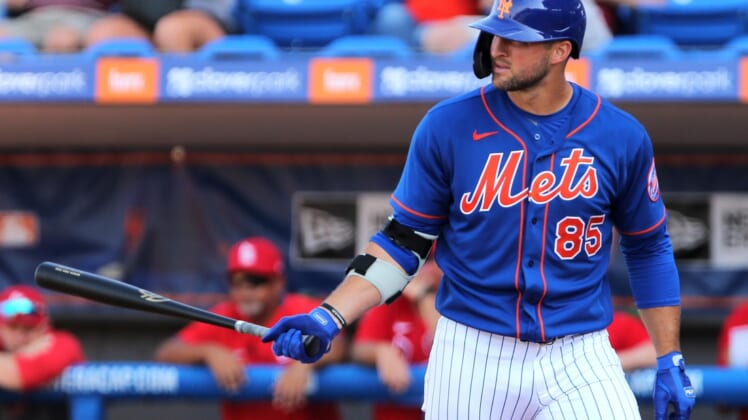 Tebow, 33, played quarterback in the NFL from 2010-12 following a Heisman Trophy-winning career at the University of Florida. The Mets signed him in September 2016.

He hit a home run in his first professional at-bat with the Mets’ low Class-A Columbia Fireflies affiliate.

“It has been a pleasure to have Tim in our organization as he’s been a consummate professional during his four years with the Mets,” team president Sandy Alderson said in a statement. “By reaching the Triple-A level in 2019, he far exceeded expectations when he first entered the system in 2016 and he should be very proud of his accomplishments.”

Tebow said in a statement, “I want to thank the Mets, Mr. Alderson, the fans and all my teammates for the chance to be a part of such a great organization.

“I loved every minute of the journey, but at this time I feel called in other directions. I never want to be partially in on anything. I always want to be 100 percent in on whatever I choose. Thank you again for everyone’s support of this awesome journey in baseball, I’ll always cherish my time as a Met. #LGM”

Tebow was part of two national-championship-winning teams at Florida.

As a sophomore in 2007, he threw for 3,132 yards and 29 touchdowns, with just six interceptions. He also rushed for 828 yards and 22 scores and easily won the Heisman.

Tebow was drafted by the Denver Broncos in the first round of the 2010 NFL draft. He played two seasons in Denver before being traded to the New York Jets in 2012.

With the Jets, he saw limited time in 2012, completing six of his eight pass attempts before leaving the league after that season.

Tebow wound up with an 8-6 regular-season record as an NFL starting quarterback, completing 47.9 percent of his passes for 2,422 yards and 17 touchdowns with nine interceptions. He had a 1-1 record as a starter in the postseason.