The Cleveland Browns want to get a Baker Mayfield contract extension done, but uncertainty around the potential salary and potential deals for Lamar Jackson and Josh Allen might throw a wrench into those plans.

With the NFL salary cap expected to skyrocket in 2022, quarterback salaries will follow suit. Entering the 2021 season, three quarterbacks (Patrick Mahomes, Dak Prescott and Deshaun Watson) each have an average annual salary of $35-plus million. With franchise signal-callers in great demand, the prices to keep them is rapidly increasing.

There is no doubt the Browns want to build around Mayfield and view him as their quarterback of the future. But with training camp approaching, it seems the former No. 1 pick is likely to play out his rookie contract.

According to Cleveland.com’s Mark Kay Cabot, Mayfield and the Browns haven’t had “substantive” contract talks this offseason and neither side has exchanged contract proposals. 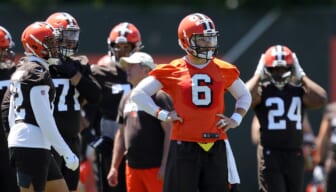 Also Read:
Baker Mayfield contract extension with the Cleveland Browns on the horizon

Cleveland already exercised the 2022 fifth-year option on Mayfield, which guarantees him $18.858 million in the final year of his deal. It’s a big reason why the front office isn’t rushing into negotiations with the quarterback, especially since running back Nick Chubb, cornerback Denzel Ward and guard Wyatt Teller are also up for contract extensions.

Negotiations between a franchise and its top quarterback take a significant period of time, even after figures are exchanged. If both sides come in $3-plus million apart in annual salary, that’s at least a $15 million difference on a five-year contract and it can take weeks to negotiate toward a middle ground. 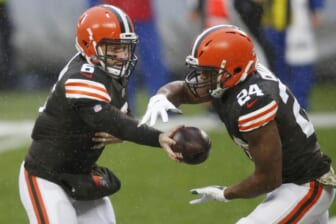 The Browns are also paying attention to the quarterback market. While Mayfield played very well in the second half of the 2021 season, the consensus is that Jackson and Allen are superior quarterbacks. With both passers also engaged in negotiations, it makes sense for Mayfield and the Browns to exercise some patience.

Why the Cleveland Browns should exercise patience in negotiations

Estimates for a Baker Mayfield contract extension suggest he’ll land a deal worth around $35 million per season. On the surface, that’s a reasonable number for a quarterback who lit up in the second half of the 2020 season and finished the year with a 26-8 TD-INT ratio.

But it’s important to consider the context. Mayfield has dealt with inconsistency on a year-to-year basis and there are still doubts about whether he can take a team to a Super Bowl. But the real focus when evaluating Mayfield, the 2020 splits with and without Odell Beckham Jr. 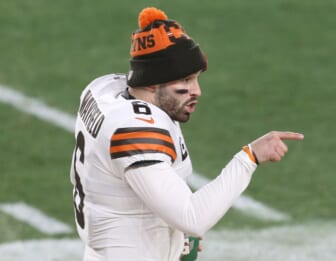 OBJ will be ready for Week 1 and the reports on his recovery from a torn ACL are positive. But Mayfield often locked in on him too often last year, which hurt Cleveland’s offense. If that happens again and the quarterback reverts to some of his old mistakes, this team won’t live up to its potential.

Ultimately, it might be in everyone’s best interest to table contract talks until the offseason. Mayfield and use the Cleveland Browns schedule as an opportunity to showcase that he is a franchise quarterback capable of carrying this team when it needs him.

If all goes well and the Browns make a Super Bowl run, Cleveland will be celebrating and Mayfield will make even more than he would right now. In the meantime, the Browns can pursue long-term deals with Chubb and Teller, ensuring one of the NFL’s best offenses stays together for years to come.