Even though the start of the 2022-23 NFL season is nearly six months away, everyone wants to know if Tom Brady will be under center when Week 1 kicks off.

We know Brady will be involved with a movie set to begin filming in the spring, but will he be throwing any footballs in front of a live audience? That’s the much bigger question.

Of course, the Buccaneers would welcome him back with open arms, as would just about every other NFL franchise, should he become available.

If we asked his head coach on the Tampa Bay Buccaneers for the past two seasons, Bruce Arians would say Brady isn’t coming back. In fact, he’s adamant in knowing this, based on what TB12 himself told him.

“He slammed it shut when I talked to him,” Bruce Arians says, asked if Tom Brady had left the door open on playing again.

Related: NFL insider ‘will not be surprised’ by Tom Brady return by 2024

Tom Brady may not want to work with Arians

We don’t have any further context from the alleged meeting or conversation that took place between Bruce Arians and Tom Brady, but it could just be a matter of TB12 no longer wanting to play for coach Arians.

To put it simply, the 2022-23 Buccaneers aren’t shaping up to look anything like the version Brady joined. Not only has Ali Marpet recently retired, but the team also has a brutal cap outlook.

His cast of receivers won’t be nearly the same as he enjoyed the past two years. With Antonio Brown being banished from the Bucs, maybe or maybe not due to intrapersonal differences between him and the coach. Chris Godwin is coming off an ACL tear and he’s set for free agency.

There’s no telling how this roster will look at the start of the 2022 season. Brady might be looking for a way out of Tampa, it’s just tricky because he’s technically still under contract with the organization.

Brady might very well want to play elsewhere, like for the team he grew up rooting for, but actually getting there presents a whole other challenge. In the end, we all might just have to face the reality that the G.O.A.T. is walking away from the game of football for good.

So, Brady won’t return to the Bucs, does that mean the team could look to trade TB12 elsewhere if he wants to come out of retirement?

Well, it appears Arians is equally slamming the door shut on Brady playing for any NFL team in 2022. It’s a sad statement, but it shouldn’t come as a shock. Arians went on to add he would ask for an astonishing “five first-round picks” in any Brady trade return.

Few teams would be willing to allow Brady to play elsewhere if they could prevent such a situation. Arians is being stubborn. He fully believes, in his mind, that the Bucs can compete for a Super Bowl in 2022, but without a starting quarterback, it won’t happen.

Meanwhile, when Brady was in New England, he became a free agent, which allowed him to go to Tampa in the first place. Although he helped bring another Super Bowl ring to town, now they won’t let him leave to pursue another. In other words, they don’t want to risk having Brady win a Super Bowl without them, and that’s pretty selfish. 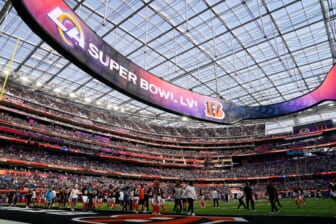