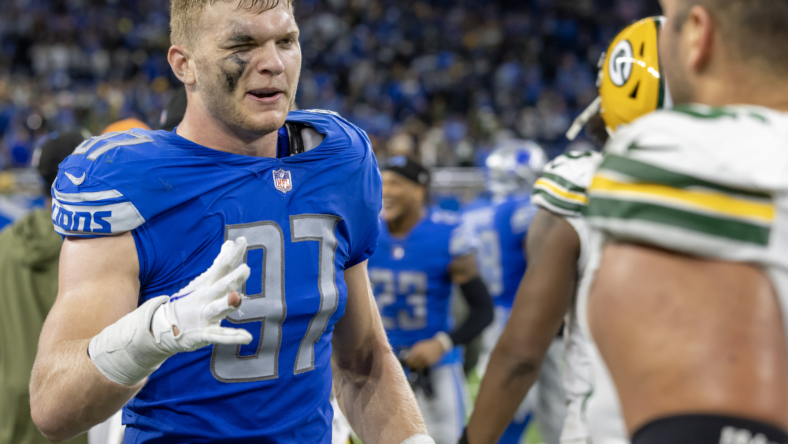 Detroit Lions rookie pass rusher Aidan Hutchinson has rebounded after some inconsistencies earlier in the campaign.

That started back in Week 9 against the Green Bay Packers when Hutchinson surprisingly intercepted two-time reigning NFL MVP Aaron Rodgers in the end zone en route to helping Detroit earn an upset win over its division rival.

Taking on a surprising New York Giants team in windy conditions at MetLife Stadium in Jersey Sunday afternoon, Hutchinson made yet another game-changing play. That included picking off Giants quarterback Daniel Jones late in the second quarter inside New York’s 20-yard line.

It really is hard to detail just how great of a play this was from Hutchinson. We’re talking about a 265-pound defensive end dropping back into coverage after faking a pass rush. He masked his coverage, forcing Jones into his first interception of the past seven games.

Like clockwork, the Lions would score a touchdown moments later to take a 10-6 lead. They would follow that up with another score for an 11-point advantage heading into halftime. Talk about Hutchinson changing the momentum of this game in a big way.

A lot has been made about the performances for rookie cornerbacks Tariq Woolen (Seattle Seahawks) and Sauce Gardner (New York Jets). For good reason. Those two are playing at Pro Bowl levels right now.

With that said, Hutchinson is more than living up to his billing as the No. 2 overall pick in the 2022 NFL Draft. Heading into Sunday’s game, he was leading all rookies in tackles in QB hits, total pressures and sacks.

These numbers are not similar to what we saw from recent NFL Defensive Rookies of the Year such as Nick Bosa and Chase Young. But comparing anyone to what they did as first-year players is not fair.

Hutchinson has had a knack for making big plays dating back to his days with Michigan. He’s now doing the exact same thing with the Lions. It has Detroit looking to win three consecutive games for the first time since 2017. Talk about being a game-changer.