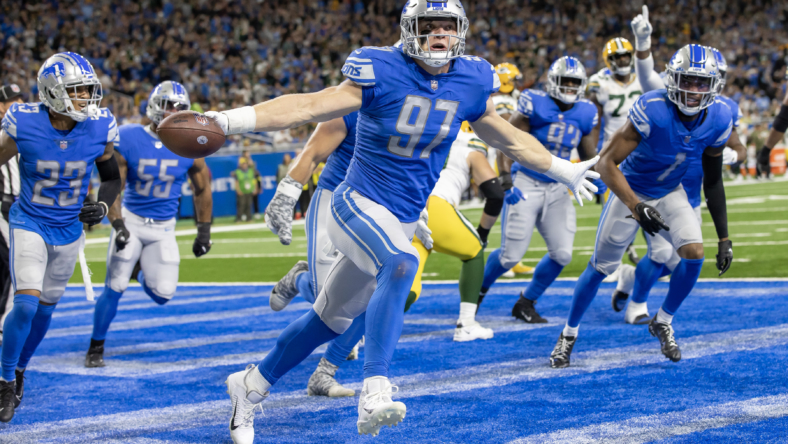 Aidan Hutchinson, the 2021 No. 2 overall pick by the Detroit Lions, is wreaking havoc early on against Aaron Rodgers and the Green Bay Packers, hauling in a truly remarkable interception in the red zone.

Oh, tackle-eligible, you say, Mr. Rodgers? While that’s usually a concept that works exceedingly well in goal-line territory, Hutchinson was able to sniff that one out real quick and flip things the other way for the Lions.

That makes for two interceptions off Rodgers in the red zone for Detroit in the first half of Sunday’s game at Ford Field, something very few of us could have possibly seen coming. And there’s good reason for that because it’s the very first time Rodgers has ever done such a thing in his career.

When you watch the play live and on replay, it really is incredible how well Hutchinson appeared to play “possum” and then pounced once the ball was thrown.

Aidan Hutchinson was not fooled by Aaron Rodgers

The way the rookie’s feet were planted, it seemed evident he knew the chances of the ball being thrown to tackle-eligible lineman David Bakhtiari were very high.

It was such a good read one would almost think a veteran like Rodgers would have faked the throw and gone in a different direction for a classic heartbreaking touchdown. But these are a different group of Lions, and let’s not pretend like this is the same Rodgers we’ve become so accustomed to over the years.

The impressive rookie out of Michigan can now officially add an interception — off of a first-ballot Hall of Fame QB, no less — to his 4.5 sacks on the season.