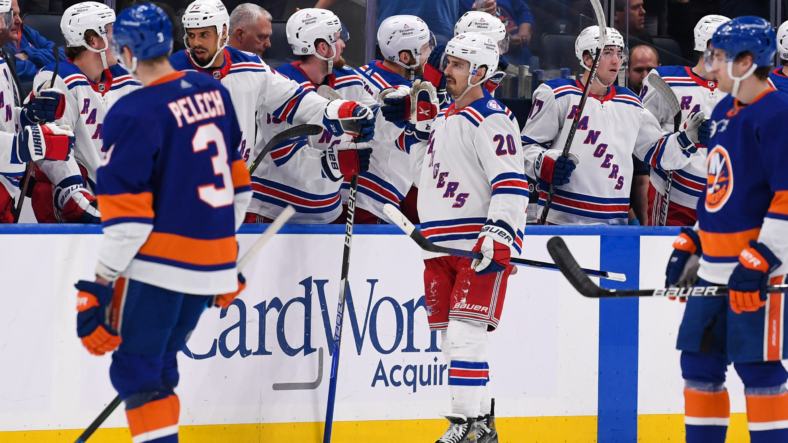 The 2022-23 NHL season is fast approaching, and the league has seen some big shakeups this offseason. The Metropolitan Division was one of the tightest last season with teams battling for a playoff spot right to the bitter end of the year.

The division-leading Carolina Hurricanes have made some big moves in the offseason, and teams that likely should have made changes, like the New York Islanders, have stayed relatively quiet. Ahead of the October puck drop, we take a look at the Central Division’s changes and things to watch.

Despite winning the Metropolitan Division with 116 points last season, the Canes got busy in the offseason. The roster saw quite a bit of change, including losing forward Nino Niederreiter and controversial defenseman Tony DeAngelo in the offseason. But the 2022-23 NHL season marks forward Max Domi’s first full campaign in Carolina, and the club also inked Martin Necas to a two-year deal, meaning they could see a real offensive spark again this season. Max Pacioretty also joined the club. Though, he’s expected to miss a significant portion of the season following Achilles surgery.

The always-solid defensive corps is bolstered by the fact that blue liner Jake Gardiner was given medical clearance to play following surgery on his back and hips, alongside the acquisition of veteran Brent Burns. With one of the strongest defenses in the league, the Canes are almost certain to make a run for the top spot in the division again this season.

The question, though, is whether the changes are enough to catapult them past the second round of the playoffs. Goaltender Freddie Andersen put up a heck of a campaign last season and, if this team can manage to avoid injuries in the 2022-23 NHL season, they could be a real force to be reckoned with.

The Jackets became one of the biggest topics of conversation this offseason after signing Johnny Gaudreau to a monster seven-year deal. They also locked Patrik Laine up with a four-year contract extension. This all but guarantees a huge offensive burst for the 2022-23 NHL season, despite the losses of Oliver Bjorkstrand and Alexandre Texier up front. Netminder Elvis Merzlikins seems to be coming into his own in the blue paint.

While it seems unlikely that the additions of Gaudreau and veteran blue liner Erik Gudbranson are enough to propel the Blue Jackets to the playoffs for the 2022-23 NHL season, it could easily push them into the right direction, giving playoff contenders trouble and accelerating the team’s push to become a force in the NHL.

Since their 2012 Stanley Cup Finals appearance, the Devils have struggled with a decade-long rebuild, one of the slower ones across the league. The roster is populated by a large group of young players, including captain (and former first overall pick) Nico Hischier, buzzed-about brothers Jack and Luke Hughes and pleasant surprise Jesper Bratt. Of course, veteran blue liner P.K. Subban became an unrestricted free agent this offseason, leaving gritty forward Miles Wood to bring experience to the locker room.

With no big names on the back end or in net, this club seems destined for yet another bottom-of-the-league campaign for the 2022-23 NHL season. The slow rebuild doesn’t seem to be ending anytime soon.

Even though the Isles had a disappointing campaign last season, general manager Lou Lamoriello and the club stayed relatively quiet this offseason, except for relieving former coach Barry Trotz of his duties. There’s something to be said for the fact that the Isles played their first 13 games on the road just to enter a new arena and simultaneously deal with COVID woes. But some changes should have been made up front. Going into a contract year, young superstar forward Mathew Barzal will likely look to have a huge season points-wise. Though, he has yet to find a suitable linemate who can keep up with his speed and playmaking ability.

A solid defense and high expectations for Ilya Sorokin simply aren’t enough to take the team back to the playoffs. Sure, inking restricted free agent Noah Dobson was a big sigh of relief for the team, but Lamoriello himself had to defend a quiet offseason in front of the media. If this club makes the playoffs in the 2022-23 NHL season, it will be on the backs of Barzal, Dobson, Sorokin and Adam Pelech.

Following a surprisingly successful campaign last year, the Rangers will look to their leaders in Artemi Panarin, Chris Kreider, Adam Fox and Mika Zibanejad to keep the momentum going for the 2022-23 NHL season. Of course, they’ll be helped by breakout goaltending superstar Igor Shesterkin, who was nothing short of sensational last year.

The Rangers took the offseason to finally name a new captain in Jacob Trouba, and made mostly subtle changes to their roster with the exception of the huge signing of Vincent Trocheck, boosting the offensive power of their back end. They lost deadline acquisitions Frank Vatrano and Andrew Copp, but it likely won’t affect this team. Look for them to make the playoffs again this season, though the depth of the run will likely depend on injuries to key players.

Related: 3 most shocking developments of the 2022 NHL offseason

New head coach John Tortorella isn’t afraid to speak his mind, and even he thinks the Flyers are in trouble for the 2022-23 NHL season. He claims there are issues both on the ice and in the locker room, which doesn’t bode well for the upcoming campaign.

The team finished last in the Metropolitan Division last season, and took the offseason to add grit in the form of Nicolas Deslauriers. But not much else. Philadelphia relies heavily on Ivan Provorov on the blue line and Travis Konecny, James van Riemsdyk and Sean Couturier up front. It also seems to have unrelenting faith in shaky netminder Carter Hart. Sure, it will be Cam Atkinson’s first full season as a member of the Flyers, but that seems like far from enough to give the club a successful 2022-23 NHL season. Embroiled in issues both on and off the ice, this club seems fated for disaster yet again.

Obviously, the Penguins enjoyed success for a long time, winning a string of Stanley Cups in a relatively short time frame. But the Pens seem to be in a slow but steady decline the past few years, and the 2022-23 NHL season is likely to follow suit.

The club struggled early and a late-season push catapulted them to third in the division, thanks to captain Sidney Crosby, Jake Guentzel and Bryan Rust carrying the team offensively. Still, their big names in Crosby, Evgeni Malkin and Kris Letang are aging, ushering in a slew of young players and vets that can take small contracts around the big names. In the offseason, the Pens acquired Jeff Petry from the Canadiens, but it may not be enough to return them to Cup-winning form. A lot depends on netminder Tristan Jarry, who won–and lost–a lot of games from his club in the last two seasons.

While it’s likely that Pittsburgh will make the playoffs again for the 2022-23 NHL season, they will likely end in a wild card spot or in the third spot in the division.

Last year, the Caps started strong and struggled as the season went on, turning things up yet again to slide into the final playoff spot despite a monster year from captain Alex Ovechkin.

The 2022-23 NHL season has to be different for them. They signed Stanley Cup winning goaltender Darcy Kuemper in free agency (though questions still surround his ability to start in net), hoping it will solve some woes in the blue paint. Marcus Johansson and Dylan Strome also joined the roster, boosting the offensive corps some. But, otherwise, little to no changes were made, indicating a level of faith in the club that won the Stanley Cup just a few seasons ago.

Of course, Ovechkin is still chasing Wayne Gretzky’s goal record, which will result in a ton of big goals for the Caps in the 2022-23 NHL season, but if Kuemper is a question mark in the blue paint, the club’s defense may not be enough to take them to a deep playoff run.