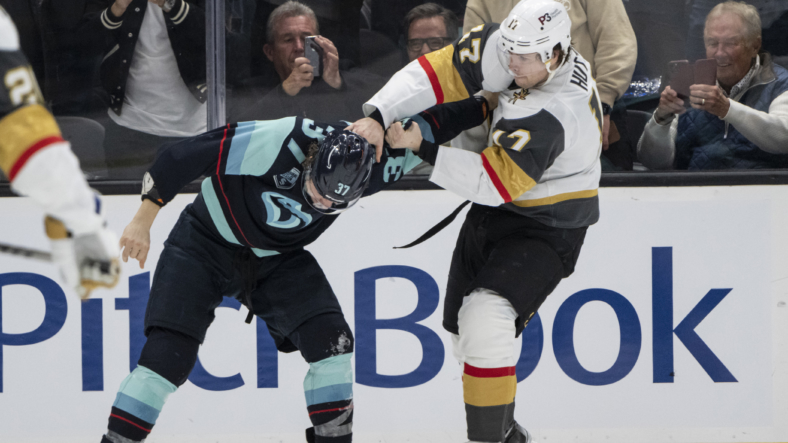 The 2022-23 NHL season is fast approaching, and the league has seen some big shakeups this offseason. Last season, the Pacific Division hosted a slew of teams in rebuild mode, but also is the home of the quickly improving Edmonton Oilers and Calgary Flames, who seem to be in constant competition in the Battle of Alberta.

There were a ton of moves this summer in this division, which could see a ton of Western Conference shakeups. Ahead of the October puck drop, we take a look at the Pacific Division’s changes and things to watch.

In the midst of a rebuild, the Ducks sent Andrew Cogliano and Josh Manson to the Stanley Cup-winning Colorado Avalanche at the NHL trade deadline. They also lost Hampus Lindholm, sending him to the Boston Bruins. But in the offseason, they acquired veteran defenseman and power play specialist John Klingberg on a one-year deal, adding him to a blue line that is, at this point, essentially carried by Cam Fowler.

The rebound is helped by impressive rookie campaigns from Trevor Zegras and Jamie Drysdale, who could be the pieces the Ducks look to build around in the future. Still, question marks surround goaltender John Gibson, and it seems likely that the Ducks will not make the playoffs for the 2022-23 NHL season.

Of course, the Flames’ acquisition of Nazem Kadri was one of the most talked about deals of the offseason, matched only by the buzz around Johnny Gaudreau leaving the Flames to join the Columbus Blue Jackets and the blockbuster deal that saw Jonathan Huberdeau and Mackenzie Weegar heading to Calgary in exchange for Matthew Tkachuk. Huberdeau, one of the league’s superstars, quickly signed an extension to stay in Calgary, leading to some interesting speculation.

Will Kadri and Huberdeau be enough to replace Gaudreau, Sean Monahan and Tkachuk? Only time will tell but, odds and statistics seem to indicate an improvement. If Jacob Markstrom can have another strong season and the defense, led by Noah Hanifin and Rasmus Andersson, can find their stride, this roster seems primed to make a playoff run yet again for the 2022-23 NHL season.

The Oilers saw significant improvement last season, from a first round exit two seasons ago to the conference finals last campaign. Questions do remain in the blue paint with aging goaltender Mike Smith joined by former Maple Leafs goaltender Jack Campbell, the latter of whom saw his fair share of struggles in Toronto. But, resigning Evander Kane, who had a strong second half with the Oilers, boosts offense,

Ken Holland and the Oilers also punched up their blue line with the addition of Stanley Cup winner Ryan Murray, who can join the likes of Darnell Nurse and Tyson Barrie on the back end. Of course, the Oilers are guaranteed offensive success thanks to Connor McDavid and Leon Draisaitl, arguably the league’s best tandem. So, it’s highly likely that they’ll find the postseason for the 2022-23 NHL season.

The Kings narrowly squeaked into the postseason thanks to a second half surge and struggles from the Vegas Golden Knights. They made it without any real significant offense, though they’ll look to Quinton Byfield to have a full healthy season and the acquisition of Kevin Fiala to punch up their forward corps heading into the 2022-23 NHL season. Still, questions around the aging Jonathan Quick and his ability to carry the team, and whether the rebuild is happening strongly enough–or quickly enough–to propel them to the postseason.

Embroiled in controversy, the Sharks lost significant pieces in the last year, some more questionable than others. Evander Kane, general manager Doug Wilson and Brent Burns all leave the Sharks, alongside fired former head coach Bob Boughner. In return, the Sharks made minor changes, including the additions of Luke Kunin and Jaycob Megna, as well as signing Mario Ferraro to a four-year deal.

It’s hardly enough to make it out of the bottom of the division, and the Sharks will need to consider kicking a rebound into full swing if they’re going to see a winning season again. It seems unlikely that the 2022-23 NHL season will bring them any success.

The league’s newest team needs a whole new look for the 2022-23 NHL season, as their inaugural campaign was a struggle. In theory, there are some good pieces on the roster, from former Colorado Avalanche netminder Philipp Grubauer (who certainly faced some issues with his new club) to Jordan Eberle, though the team lacked cohesiveness and drive.

The club had a relatively busy July, but didn’t see any big names join the roster. Rather, one of the club’s more attractive pieces from the expansion draft, Calle Jarnkrok, joined the Toronto Maple Leafs. With a lot of work ahead of them, don’t look for the Kraken to rise much in the divisional standings.

JT Miller took over half of the offseason just to remain with the Canucks, who are very clearly in the midst of a rebuild. He’s joined by early summer addition Ilya Mikheyev, as well as recent addition Curtis Lazar. Still, there are plenty of young players, from Elias Pettersson to Quinn Hughes to Brock Boeser. Vets like Bo Horvat round out the roster and, while there are plenty of bright young stars around, the club may not be far enough along in the rebuild to make a significant impact in the Pacific Division for the 2022-23 NHL season.

That said, if one team was going to pull off a surprise upset, the Vancouver Canucks could be a sleeper contender.

Last campaign saw the Knights miss the playoffs for the first time in their short NHL history, but they kept busy ahead of the 2022-23 NHL season. Some of the bigger transactions were losses in the form of Max Pacioretty, and Evgenii Dadonov. But Phil Kessel’s addition and Jack Eichel’s first full season with the club could really spark some much-needed offense and add some veteran presence to a roster that, quite simply, broke down at the end of last season.

With leading netminder Robin Lehner injured for the entire upcoming season, the Knights will likely struggle. Though, they could narrowly squeak into a playoff position in the form of a wild card spot.