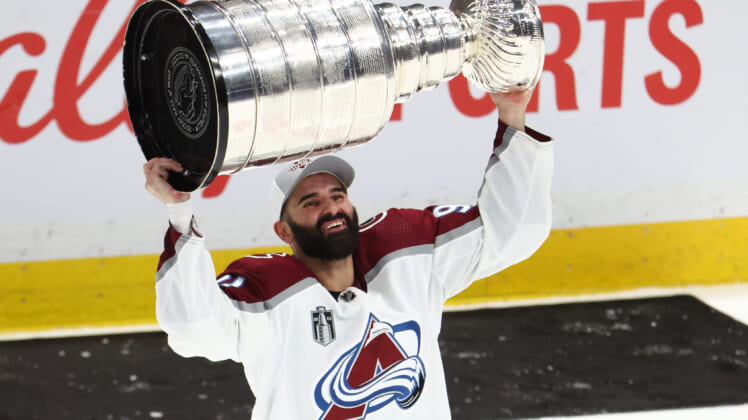 With the summer winding down and hockey season gearing up again, there are still many players who don’t have a jersey to suit up in next season. Some are shocking, with speculation lasting all season long, and others (like Phil Kessel) could potentially be toying with retirement. But, with some big names left unsigned, here are the top five NHL free agents who still have not inked a contract.

The Stanley Cup winner had a monster campaign last season, propelling his Colorado Avalanche to victory, but Nazem Kadri has yet to sign a new deal. He’s likely to get a huge jump from his $4.5 million cap hit last year, but is reportedly holding out to sign with a Stanley Cup contender.

Kadri’s long been linked to the New York Islanders, but could go to a few key destinations that could really use an offensive boost, turning them into cup contenders. By a long shot, Kadri had the most points last season of all the available free agents with 87 (Phil Kessel was second with 52), making him the most attractive–and probably coveted–signing this offseason.

Even on the rebuilding Anaheim Ducks, the American-born forward had a breakout season, playing alongside Trevor Zegras to create some of the NHL’s prettiest, most memorable plays. Sonny Milano’s proven he can be a valuable addition to any forward corps, can work well with offensive dynamos, and can make plays himself, even on a team that doesn’t necessarily have strong offensive talent.

What’s more, he likely comes pretty cheap (his cap hit last year was $1.8 million) and is young enough at 26 to be moulded into whatever a team may look for, making him one of the top NHL free agents this season.

While the Pittsburgh Penguins could still find room to resign the young, Toronto-born forward, he enjoyed an impressive campaign last season and could ask for more money than the Pens are able to give, making him one of the top NHL free agents this offseason.

The 28 year old found himself in the bottom half of the Penguins offense last season, but has the capability to play both center and right winger, and could be a reliable component in a cusp team’s rebuild next year. What’s more, asking for more than the Penguins can give does not necessarily mean asking for a lot of money–he boasted a very reasonable $1 million cap hit last season and posted 43 points in 82 games in a somewhat diminished offensive role.

Defensemen are hard to come by this offseason, and Subban comes as a viable option with veteran presence and a proven track record to put up big points, though he dropped off of late. He would likely sign for less than his massive $9 million cap hit, and could breakout on a team that can capitalize on his ability to take a big shot from the blue line.

His position as one of the few NHL free agents on the blue line this offseason, plus his track record for scoring big goals, make him a strong potential target for teams looking for a rebuild.

Larsson has had the disadvantage of being on teams that haven’t necessarily seen a lot of success for most of his career. So, given the opportunity to lift out of teams like the pre-Kirill Kaprizov Minnesota Wild, Buffalo Sabres and Arizona Coyotes, Larsson could really make an impact. He’s also entering the prime of his career at 29 years old, so the Swedish forward could take his reasonable $1.8 million cap hit to a team that can take advantage of his capabilities.

He put up a respectable 21 points in 43 games on a bottom barrel team, and could really make an impact if sparked on the right team, which makes him an attractive NHL free agent.