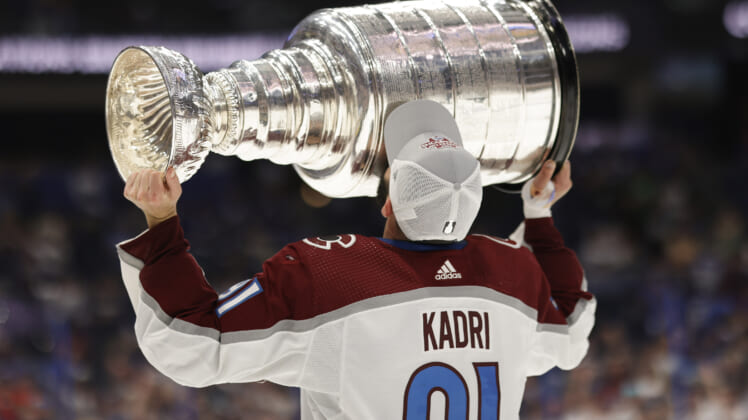 There’s a lot of money for free agents who just won the Stanley Cup. There’s even more money for unrestricted free agents who had, by a long shot, the best season of their careers and were pivotal in their team’s playoff success. This, finally, is the position of Nazem Kadri, one of the most controversially successful players in the NHL.

The forward, for a time, was considered a “liability” to his teams, first the Toronto Maple Leafs and then the Colorado Avalanche. But, that all changed last season when Kadri, through an onslaught of injuries to Colorado’s superstar first-liners Mikko Rantanen, Nathan MacKinnon, and Gabriel Landeskog, enjoyed an inspired, Cinderella-like season.

In the regular season, he posted 87 points in 71 games and was one of the league’s leaders. In the playoffs, he battled through a hand injury to score a few huge (albeit controversial) goals that would take his team to the cup. He didn’t record one suspension, not even one bad penalty, and prompted him telling his haters and anyone who doubted him to kiss his butt in a now-viral interview.

But, now, as an unrestricted free agent (UFA), Kadri has the option to join a new team and get a whole new (likely huge) contract. Here are three places the Toronto native could end up next season.

With projected cap space valued at just over $11 million, according to CapFriendly, the New York Islanders certainly have the means to offer the forward a huge contract, a huge bump from his previous $4.5 million deal. What’s more, the Islanders will look for some new additions after making it to the final four playoff teams two seasons ago and then failing to make the postseason last year.

They’ll need to beef up their offense–mainly, they’ll need a speedy winger who can play alongside their young star Mathew Barzal–and Kadri fits the bill. He’s a step up from the many wingers who found themselves on Barzal’s wing last season, including Oliver Wahlstrom, Kyle Palmieri and Zach Parise, none of whom could really keep up. Islanders GM Lou Lamoriello, after firing coach Barry Trotz earlier this summer, will likely look to shake up the team even more this offseason, and the Islanders are seemingly the frontrunners in the Kadri rumour mill as a result.

The Colorado Avalanche could strike a deal to keep Kadri

The adage “if it ain’t broke, don’t fix it,” could certainly apply to the Avalanche’s situation with Nazem Kadri. After losing forward Andre Burakovsky, who signed with the Seattle Kraken in free agency, the Avs could work to keep the forward they slotted into various parts of their lineup as required.

Keeping Kadri, though, would mean some rejigging of the roster to make room for his salary and stay under the cap. Rumours are swirling that the Avs could trade Samuel Girard (ironically, to the Islanders) and use the $5 million cap room to resign Kadri. The only thing that makes this theory a bit questionable is the fact that this upcoming season is Nathan MacKinnon’s last year under his extremely team-friendly, $6.3 million contract, and he will likely take a pay increase that the Avalanche need to have room for.

There’s no doubt that Steve Yzerman knows how to win–he won with the Red Wings as the team’s captain in the early 2000s, and he is hugely responsible for the Tampa Bay Lightning’s successful rebuild that moulded them into the league dominating team they are today. So, in the midst of a rebuild with the former legacy team, the Detroit Red Wings, Yzerman could look at Nazem Kadri as being the missing piece of the puzzle.

Kadri would slot in on the second line, behind the team’s captain, Dylan Larkin. Larkin just enjoyed a 30-goal year on a youthful roster (though he himself is still quite young), and could explode with someone like Kadri helping him out offensively.

The Stanley Cup winner would join the likes of forwards David Perron, Andrew Copp and Dominik Kubalik, blue liners Ben Chiarot and Olli Maatta, and netminder Ville Husso, who have all inked deals with the club this offseason, and would make a huge impact in accelerating the rebuild. And, Yzerman has done a masterful job being mindful of the cap: he still has just over $10.2 million to play with, which is more than enough to offer Kadri a deal that could be too good to pass up. It doesn’t hurt that Detroit isn’t a long drive from Kadri’s native London, Ontario, either.

For now, Kadri is still on the market, widely considered to be the most coveted UFA that doesn’t yet have a team. While this may be a surprise to some, Kadri has the league eating out of the palm of his hand, and is in a position to choose his own destiny.